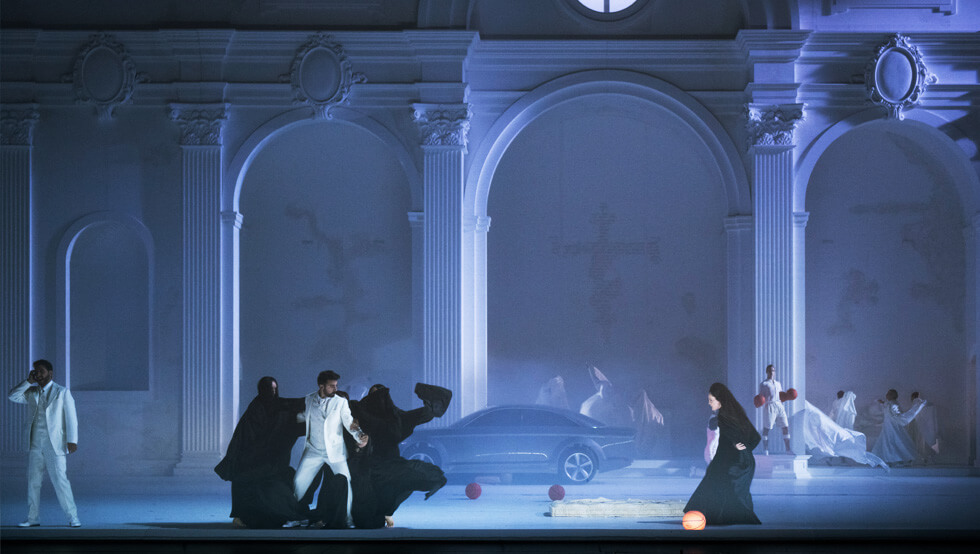 REVIEW DON GIOVANNI SALZBURGER FESTSPIELE: A KICK IN THE BUTT

Don Giovanni has been given a good kick in the butt in this magnificent, but also controversial Salzburg version of Mozart and lyricist da Ponte’s unsuspecting contribution to today’s #MeToo ramasjang.

Italian large-scale opera director and theatrical avant-garde Romeo Castellugi has extemporised so much from the original material that one is astonished, amused and above all amazed beyond measure, just as it should be here at the Salzburg Festival.

For just what kind of wildness is unleashed in the almost five hours that Don Giovanni is snuck up on this evening in Mozart’s otherwise tuttied hometown.

The curtain goes and the stage stands: A stark, geometric Renaissance-style church interior, white on white with rows of stringy pews, religious paintings, sculptures and a giant gold cross above the altar. The course is chalked up …and we wait…. and wait…

In comes a SWAT team of 10-20 movers in dapper white overalls and starts dismantling the whole shebang. Bench by bench, painting by painting, sculpture by sculpture. Away with it all, until only the large cross remains, requiring a little extra work to dismantle and back out of the scene.

5-7 minutes pass in concentrated silence, then the stage is empty. Scattered applause from a disoriented audience accompanies the last mover out backstage.

Without warning, a car is thrown from the ceiling (you read that right). A real Volvo is released from above and hurtles the 10-15 meters through the air and lands with a bang on its four wheels. Now it stands there in the middle of the emptied church hall.

Is it only now that the iconic overture begins? You hardly remember it, because everything has been pushed around. You’re seething in your tuxedo and stiff FFP2 mask, trying to decode the symbolism, as Don Giovanni and servant Leporello make their entrance, similarly dressed in seductive white suits. Ready to rock…

The set is de-Christianised, there are clearly limits to what the Lord is good for.

That it thus promises to be just ungodly enough has probably sunk in, even with amateur analysts.

But then a goat runs across the stage completely unaffected. And shortly afterwards a grand piano is smashed from the ceiling and goes to pieces. Add 15-20 orange basketballs that also sprinkle from the ceiling. Then a poodle, then a rat…

Did you just lurk that? Mnjaaa..

As the action slowly establishes itself, the show finds a groove of sorts to run in. Stay there, you’re already thinking. Because there’s something about the whole thing that seems so made up and without real footing despite the entertainment value.

Don Giovanni has sneaked into the Commandant’s palazzo to seduce the house’s beautiful daughter Donna Anna. He is discovered and kills the Commandant in a duel. A killing that backfires in the show’s finale, when the Commandant returns as a statue and drags Don Giovanni down to hell for his sins.

Before then, however, Don Giovanni is at it again, wreaking havoc at beautiful Zerlina’s wedding in order to preempt the groom’s wedding night.

A giant carriage lowered soundlessly from the sky accompanies Giovanni’s irresistible flirtation in one of the opera’s most beautiful sequences. And when the servant Leporello is getting fed up with it all, a pair of photocopiers immediately arrive, quickly producing a lot of money to ensure the servant’s continued support. Anything goes in the props department.

The whole party is enticed to a party at Giovanni’s palace where waiter Leporello makes sure to pelt them well with wet goods so Giovanni can get in the jug with the bride unseen. From here, new entanglements and intrigues gather further momentum.

The party goes bananas with smashed furniture, confetti cannons, fat men in funny-bikinis and handball goals on stage, where Giovanni’s list of sins also begins to materialise with a couple of hundred partially undressed women on stage.

Each one with a downcast look, shamed by the vile villain Don Giovanni, who in an astonishing final scene ends up as a crippled petrifaction, left on the stage floor a la the well-known casts of the victims from Pompeii.

The petrified end of the culture of frailty. So they can learn, the macho bastards.

Does that sound messy? It is, to say the least.

It’s a splendid show, but it’s as if the endless addition of bold and abstract symbolism takes the momentum out of the performance, which may be a festive piece of equipment of great originality, but which also divides waters here in Salzburg.

What happened to the immortal qualities of the original, and is it actually made better by all the razzmatazz?

We get vocal excellence in abundance from the soloists – the set and costumes are completely stunning, though the orchestra delivers a little below Salzburg level for example in the iconic overture, which doesn’t get the roar and bang we love at all.

A spectacular and highly creative Don Giovanni interpretation that sets the bar high but overshoots the mark. 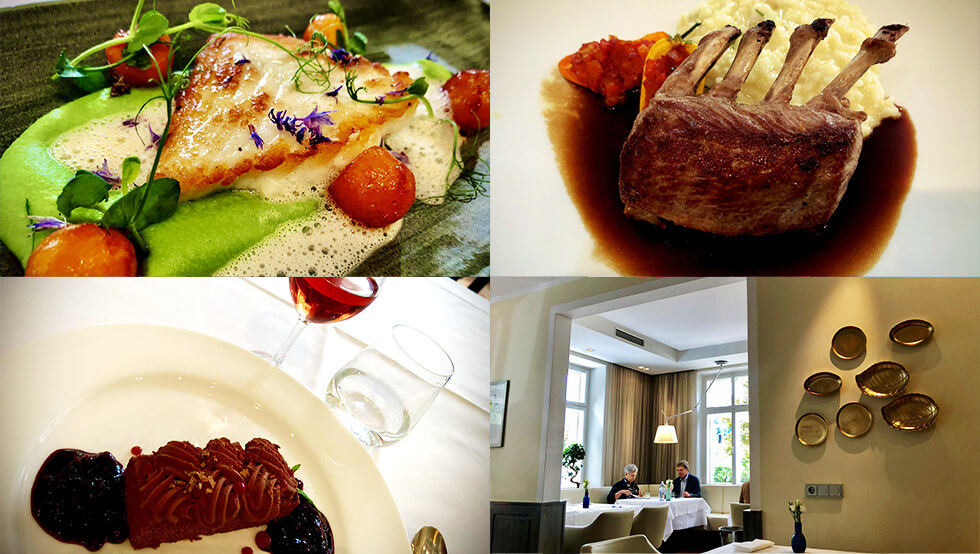 IMMEDIATELY AT EASE WITH BRUNNAUER

Just five minutes outside the highly touristy centre of Salzburg, you’ll find a breathing space of gastronomic and aesthetic class. Restaurant Brunnauer is in the Michelin guide and should get a star.

You’ll immediately feel at home in Brunnauer’s beautifully decorated rooms, which are furnished in a simple Scandinavian quality style.

Run by the very likeable Brunnauer couple, you’ll notice more regulars at the tables and a welcoming atmosphere.

I arrived by bike and, after quenching my thirst with a glass of the place’s fresh draught beer, tucked into two classic dishes from the lunch menu.

A beautiful piece of Atlantic monkfish landed in front of me on a green earthenware plate, accompanied by a beautiful pea puree and fresh pea shoots.
Small, caramelised balls of honeydew melon were a fresh and original accompaniment, adding a splash of colour to the dish.

In the glass I had an absolutely excellent, completely fresh 2020 Riesling from the Austrian Traisental with lots of mineral and notes of ginger.

You know when the first serving, including the wine pairing, is right in your face and you realise you’ve come to the right place…

Next came a truly beautiful dish of lamb shank in a cloud of power accompanied by artichoke risotto and mini peppers with a delicate stuffing of – rhubarb?  Yum.

I chose a glass of light, red Blaufränkisch of local origin – pinot noir style, probably more thin-boned than good, but it was an excellent glass that went quite well with the well-prepared lamb. Classic. Uncomplicated. Approved.

Of course, I rounded it off with a lovely glass of Spätlese to go with a naughty piece of chocolate cake with dark berry compote.

A clear focus on good ingredients and the deftly curated selection of classic dishes expertly prepared, make Brunnauer a definite repeat choice next time in Salzburg.