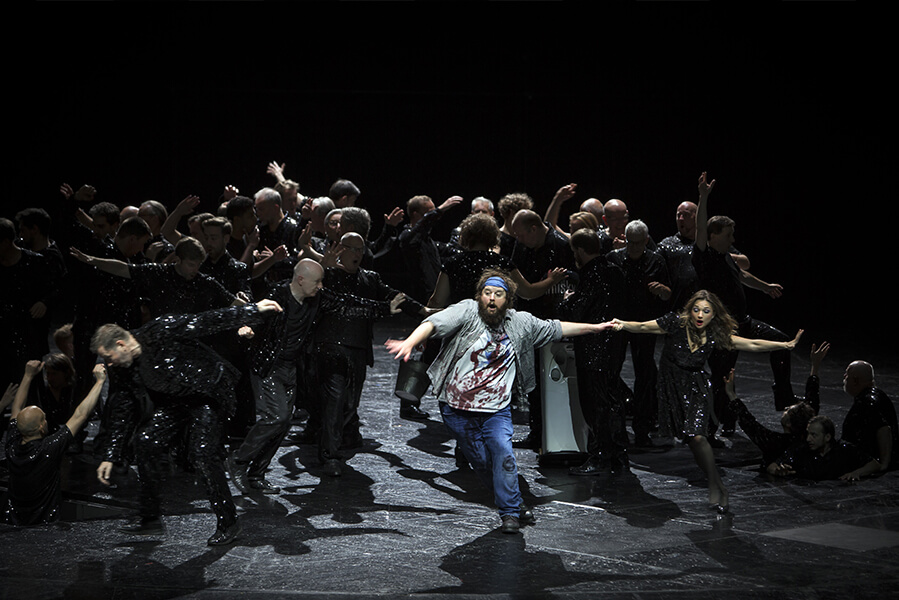 Star director Barrie Kosky is known for his show-stopping productions of opera classics, which tend to be dressed up to the breaking point with spectacular set design, shameless sex and challenging fun. Unfortunately, in his latest production as director of the Komische Oper in Berlin, he has found the counterpoint.

Mahagonny is a crass critique of capitalism, written in the 1920s with musical references to opera, musical, and jazzy styles alike.

The plot hides the chaos and cynical free-wheeling capitalism that was part of the roaring 1920s in both Rockefeller’s USA and Weimar Berlin.

A dance on volcanoes, for example, so dazzlingly portrayed in the hit TV series Babylon Berlin, of which there is thankfully a season, or I think even two more, in the pipeline.

The plot is a kind of post-John Wayne Wild West romance gone wrong.

On the run from the FBI, three fugitive friends in the middle of nowhere found a utopian town called Mahagonny to lure people in with cheap booze, willing women and the promise of a perfect life.

Show me the way to the next whisky bar – it’s from Mahagonny – does it ring a bell?

The concept sounds fantastic, and everything goes brilliantly at first, until an Old Testament-ish, punishing storm threatens to smash it all.

The storm spares Mahagonny at the last moment, and the town reciprocates with an even more loose moral code.

You can do anything you want, just anything you can afford. You hungry? Why not blow up a pig in the middle of the stage and eat yourself to death, sailing in bloody guts. Just do it!

The performance’s two acts are played out in the same bare stage space, constricted by two sloping partitions that squeeze the assembled cast into a symbolic chaos.

Covered in the first act with a black graphic that looks like something between a chicken net and a shower curtain from IKEA.

From the start of the second act, the curtain is pulled away and the walls now appear as giant mirrors, kaleidoscopic reflections, reportedly exhibiting a selfie-like narcissism I confess I’m having a little trouble catching.

In any case, things end badly when Jim Mahoney, a visiting lumberjack from Alaska’s harsh logging life, first puts all his money on the loser in a boxing match, then offers free rounds to the entire bar without a cent in his pocket. The penalty is death.

The entire cast is dressed in black sequined suits in the second act, which are both a spectacular sight in the angled reflections and illustrate the glittering forgetfulness of capitalism.

Jim’s execution is nicely disgusting, as he first has his eyes gouged out, then is stabbed with a knife that passes from hand to hand among the entire cast. He’s played effectively by Allan Clayton with Nadja Mchantaf as Jenny, who also chooses to bugger off at the end.

The show is saved at the finish line by an uncommonly good finale. Dying on the stage floor is Jim as a rather long and really nice piece of choral music plays with the whole cast demonstratively off stage to emphasise the loneliness and unhappiness.

It’s a chilling Rekviem for Dollars in its own right – and the show may not reach the usual Kosky heights, but the master hasn’t completely lost his touch.

The usually overachieving stage director disappoints somewhat in his latest home production, but he’s still my favourite director, and I look forward to following him freelance around Europe, for example when he stages Eugene Onegin at the San Carlo in Naples this summer. Just a tip.

Three stars for a show that you can probably drive around for a long time, but from the passenger seat, it’s not the most exciting Saturday at the theatre I can recall. 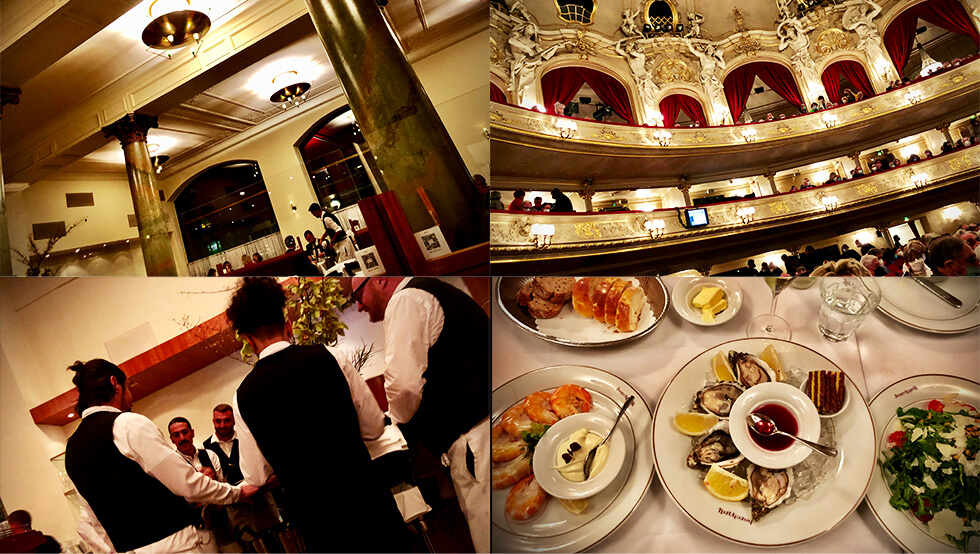 We are talking about celebrity factor – in German. Without Borchardt, Berlin wouldn’t be a real metropolis.

It’s at Borchardt, a stone’s throw from the Komische Oper, the likes of George Clooney, Natalie Portman, Barack Obama and your reviewer from Det Sku’ Du Se (Got To see This) are met around theatre time.

It’s where you come not just to eat, but to run into other celebrities and be seen yourself.

So it doesn’t matter that the Wiener schnitzel also is said to be really good and the classics of French Mediterranean cuisine are presented honestly and properly.

August F.W. Borchardt’s high-ceilinged, four-pillared restaurant dates back to 1853, when it opened as a wine bar, and has thus survived both world wars and lived through the roaring 20s of which Mahagonny paints a sour picture.

During the GDR, the restaurant was used as a cookery school, and in fact it was here that some of the older chefs in Berlin learned their trade. After an intense renovation in the 90s, Borchard’s is number 1 on the list of Berlin’s Promi places, which also includes Grill Royal and Paris Bar.

I always eat here before going to the Komiche Oper. I haven’t seen Barack recently, but be sure to make a reservation as it’s always packed.