THE ABDUCTION FROM THE SERAGLIO | STAATSOPER HAMBURG 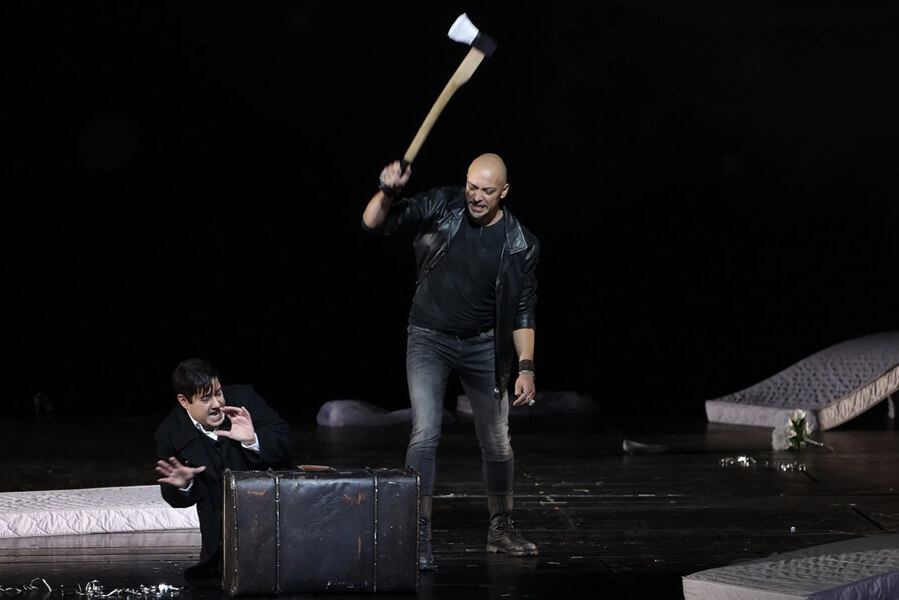 REVIEW THE ABDUCTION FROM THE SERAGLIO: TOO LITTLE OF EVERYTHING

A thin-boned and silly staging of Mozart’s breakthrough opera The Abduction from the Seraglio does not do Wolfgang’s genius justice in this production at the Hamburg State Opera, which for once disappoints its discerning audience.

There is too little of everything in a performance that undeniably lacks the geswung to give body and soul to the already thin story. Sketches of Mozart’s later operatic magic are hinted at, and help a little.

Mozart himself conducted the first performance in Vienna in 1782. It is of this opera that Emperor Joseph, who sponsored the German-language work as a counterweight to the italian opera invasion of the time, said ‘there are too many notes’, to which Mozart replied that there are exactly the notes there should be. The story is a good one, but it’s not entirely true.

Konstanze loves Belmonte but is locked up in the harem (Seralia) of the tyrant Bassa Selim’s Ottoman palace, where the bald muscleman Osmin jealously guards the ladies.

The central part as Osmin does not deny its humorous potential and is absolutely well sung with thunderous voice by the baritone Ante Jerkunica.

I love Osmin’s simple recipe for problem-solving, a mantra he repeats several times along the way.

In that order, that is. I particularly like the first two steps of the punishment, which evoke a cheerful image. Read it again and see for yourself.

Belmonte has come to free his beloved Konstanze, who has so far managed to evade Bassa Selim’s lusty sex drive, but things begin to add up, when she once again rejects his advances and throws both roses and champagne back in the tyrant’s face. Then he can learn, the abusive bastard.

The thing is, Bassa Selim, nicely delivered by Burghart Klaußer, is actually in love with Konstanze, and doesn’t want to hurt her. Bassa craves Konstanze’s voluntary love, and the more she resists, the more in love he becomes with her.

There’s something about love that’s often screwed up damn impractically.

With the help of the palace gardener Pedrillo, Belmonte manages to get a job as a house architect at the Seraliet, with a view to staging a liberation operation in which Pedrillo’s chosen one, the maid Blonde, can also be involved.

In a cheerful scene with a lovely violin sequence that illustrates the delectable effect of alcohol, the jailer Osmin manages to get drunk on the floor after a trip around the cliché playing a squeaky air guitar.

The escape is discovered, and it all ends in crazy happiness.

In the finale, however, the tyrant Bassa Selim shows mercy, releasing the four lovers on love’s bidding. As we know, it was good tactics among artists to portray men of power as wise and forgiving. Or else….

As you might guess, this rather naive storyline needs more than the usual good pimping to make an exciting stage performance.

You’d hope for a glorious, gold-glimmering Persian palace, or maybe just a creepy update to dark hooligan castle with drugs and trafficking – but instead you get a half-empty stage with a few worn mattresses thrown in.

The fantasy-lessness is accompanied by an actually rather cute video projection of somewhat charming, cartoonish animations.

The props department’s most significant contribution is a rather large axe that Osmin contemptuously carries, a baseball bat, and the arms and legs of a mannequin doll, which Osmin manages to bet beaten up with in a scene that seems rather silly, to say the least.

There simply aren’t many points for this staging, which can probably be excused for its coronary-related limitations and a director change late in rehearsal. Director David Bösch is hardly wild about the result either.

The best thing about the performance is the refreshing music of the young Mozart in the hands of Adam Fischer’s energetic and lively direction.

One senses in this early work sketches of some of the magic with which Mozart enchants us in later, indisputable operatic hits like The Marriage of Figaro and Cosí fan Tutte.

Enjoy the lightness and transparency of the music. Delight in the phenomenal double duets where four lovers’ song lines weave in and out of each other in magical, equilibrist composition. This is art.

For once, Hamburg underperforms with this Mozart, which, despite its excellent soloists, falls short of its usual high standards. 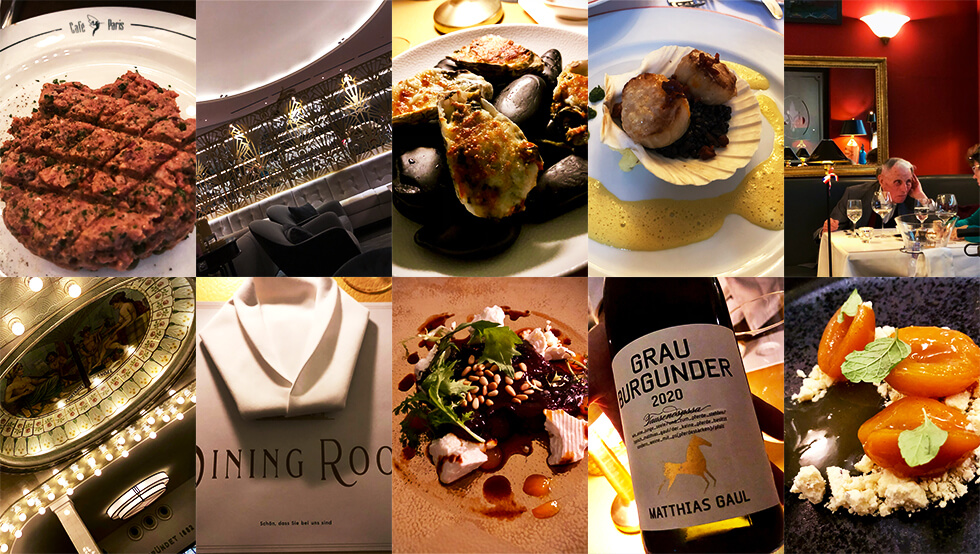 The Dining Room passes for one of Hamburg’s top dining spots. This was not the case when I visited the hyped and a little too smartly decorated restaurant.

The gratinated oysters had suffered a suffocating death under a dense layer of stiffly baked Comté and suddenly made the otherwise ordinary shrimp cocktail ‘Rockefeller’ more interesting.

A complete mistake was the signature dish, fried jellyfish with pine nuts and feta, which I would place high on the list of most dissapointing meals I’ve had in a restaurant.

Better was the Hamburg classic Café Paris near City Hall, where people still queue to get in and enjoy the good tatar and the bustling atmosphere. Recommended anytime.

A new, quirky find is Petit Bonheur, Francophile to the fingertips and with a super cosy living room atmosphere that embraces classic French dishes.

I had a couple of fantastically good roasted scallops with a kind of hollandaise foam, which together created a distinct aura of luxury. Lovely lunch in a neighbourhood with weird little underground galleries, like Heliumcowboy.

VLET in der Speicherstadt is a smart, new sought-after eatery in the hyped warehouse district, which, in a regrettably tame corona setting was an unexpectedly poor experience despite excellent bouillabaise and dessert of stewed fruit.