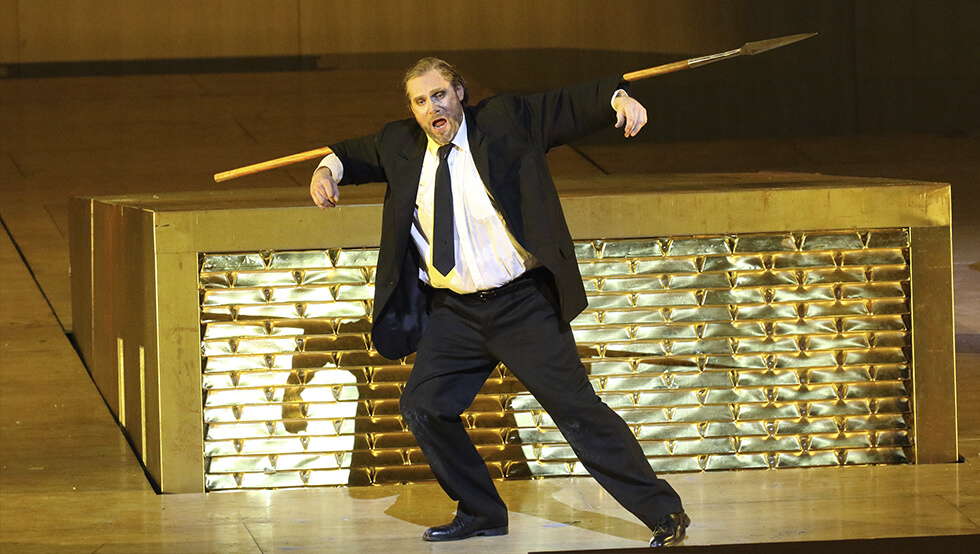 The Rhinegold at the Munich Opera Festival presents every degree, manifestation and complexity of both love and power.

There are distinguished vocal performances in a spectacular and astonishing package that is original and jovial – and at certain points as dogged as a toddler.

It would have come as no surprise if Lord of the Gods, Wotan had announced that absolutely nothing had been swept under the rug as he hands over the Ring of the Nibelung to a pair of hapless giants in return for their having erected a fortress in Valhalla.

In fact, of course, something was. The ring is forged from stolen Rhinegold and therefore cursed. Anyone who owns it is destined for trouble. Within minutes of the giants receiving their enormous golden treasure, including the fateful ring, one has slain the other.

What then is the deal with this Rhinegold stuff?

If you imagine Rhineland cowboys in Lederhosen slinging mud at each other on the slippery banks of the river, think again.

The Rhinegold is golden rays of sunshine reflected in the flowing waters of the Rhine and therefore a metaphor for something everyone wants but no-one can possibly own.

At this juncture, I know that you, clever reader of Det Sku’ Du Se, have already figured out that it’s all about love.

In fact, it’s about every degree, manifestation and complexity of both love and power.

The Rhinegold is the pilot episode of Wagner’s Nibelungen’s Ring, four independent operas whose total playing time of 17 hours is distributed over a four-day Cycle.

A knock-out cultural experience of the kind everyone of us should expose ourselves to at least once in our lifetime.

We currently have stage director comet Stefan Herheim’s version of The Ring to look forward to. Delayed due to COVID-19, three cycles are now scheduled to take place in November 2021 and January 2022 at Deutsche Oper Berlin. Det Sku’ Du Se will be on the spot, reporting from these performances. Something positive to look forward to!

The libretto is populated with a monumental army of gods, heroes, giants, intimidating Valkyries and all manner of despicable miscreants.

The Munich Opera Festival revives its 2012 version of The Rhinegold, this time with Swedish John Lundgren, a bass-baritone well-known and highly appreciated by Danish opera buffs, in the role of Wotan who does his darnedest to keep the universe intact whilst power and love are under attack from all sides.

The production is an appealing bouquet of mixed blooms to enchant, enrapture and enrich a full Staatsoper opera house.

At times the production is spectacular and astonishing, at others innovative and humorous – and momentarily as unrelenting as an infant.

As, for example, the full extent of the iconic prelude in E flat – one long E flat major chord that bubbles, froths and fluctuates over 136 bars/4 minutes and a stage resplendent with semi-naked extras giving their all to emulate a swaying sea of eelgrass on the Rhine riverbed…

The giants tramping around on oversized OXO cubes of compressed and suppressed human bodies is a delightful spectacle and one of the performance’s visual pinnacles.

The same applies to the underground scene, in which the evil gnome Alberich, having enslaved his fellow gnomes in a Dantesque gold-diggers’ inferno, receives a surprise visit from Wotan and his henchmen dressed to kill as smoke jumpers disguised as earwigs. Pure genius! All in all, it has to be said that this particular shot at The Rhinegold is excellent value for money – this is a 24-carat operatic extravaganza.

Strong vocal performances and an outstanding orchestra fail to mask the overall impression of a moderately contrived piece. However, this was essentially an entertaining 2½ hours – a mere trifle in the Wagnerian context.

Within those 2½ hours, many words are sung and much of the plot established for subsequent elements of The Ring, in which the curse of the stolen Rhinegold continues to wreak havoc, despite Wotan’s intention to return the Ring to the Rhine Maidens and smooth all the ruffled plumage.

The adventure is set to continue in The Valkyrie, Siegfried and Götterdämmerung. After a memorable and superbly professional opera performance, you can proceed to revel in Munich’s cosy atmosphere and palatable culinary attractions.

The Munich Opera Festival offers a range of good, high-class performances customarily during the month of July. I warmly recommend a combined opera and sightseeing trip to the Bavarian capital. 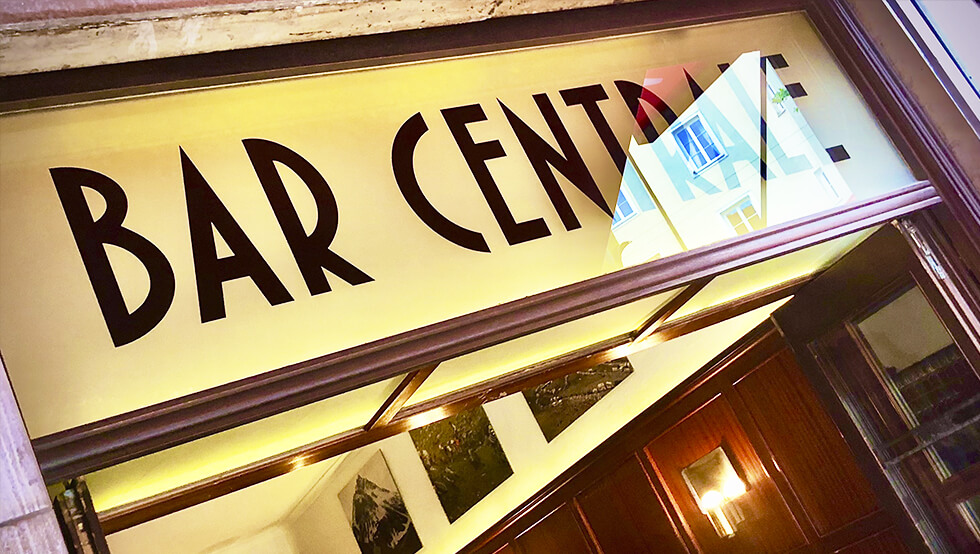 BOMBASTIC BMVS AND MUST-STOPS FOR FOODIES

When in Munich, you should visit the Michelin three-star Restaurant Atelier, which, during my visit, was unfortunately closed due to COVID-19. But make a note of the name.

Heavily hyped and also closed due to corona, was EssZimmer. The restaurant is located in the crazy architecture of the BMV Welt museum, an excellent venue for anyone interested in enjoying a cavalcade of bombastic BMVs on home ground. Society is about to reopen and the venue is well worth a visit even if you are not a petrol-head.

On Marienplatz square in central Munich, there is a must-stop for foodies, an epicurean establishment named Dallmeyers. Dallmeyers runs a lush, fine dining restaurant, Alois, and a chic Bar & Grill reminiscent of Copenhagen’s Café Victor, where I indulged in a delicious, light opera lunch with shellfish and Riesling (surprise, surprise…).

Imagine plump prawns in pink chilli mayo served on bright blue faience and Gillardeau no. 2 oysters, a bit on the large side for my taste, served on a delightful silver-plated Art Deco fish plate engraved with writhing octopus arms. That sort of thing. Request a table at the window or slouch lazily at the bar – a new take on the unbearable lightness of being.

I had to wait a while for my seat so I explored the neighbouring streets and came upon something quite unexpected.

NB: Inside information for connoisseurs. Check out Bar Centrale, 120% Italian bistro, a hive of activity on both sides of the counter. Espressos and proseccos flying through the air. Everyone speaking Italian, saying ‘Ciao’ and ‘Grazie davvero’, smiling and kissing cheeks as if there were no tomorrow.

The faded photos on the walls of cycling heroes of the 1960s and 70s (remember Pantani?), the TV babbling in the corner with no-one watching it and the radio tuned to an Italian channel with wave upon wave of catchy Latino pop and crackling Mediterranean chitchat – this is all picture-perfect.

Bellissimo, as they say. The food is traditional in the extreme. I watched enviously as plate after plate of the conventional selection of pasta dishes, antipasti and contorni was conveyed to the tables. Oh, the aromas were just right… My turn next time, I guess.