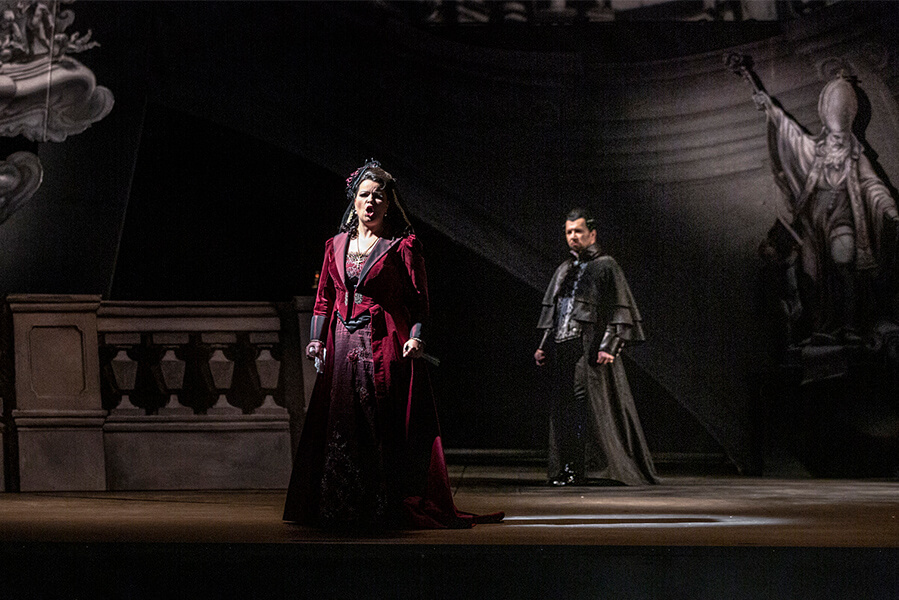 I have hardly seen a more classical performance of Tosca. First of all, the production here in Prague confirms how excellent Puccini’s world-famous opera is. Fabulous, flowing music. A dramatic, sharply cut and clear storyline. Tear-jerking hit arias. A magnificent villain. A mountain-topping heroine. And a lot of dead people. What more could you ask for?

They die like flies in Tosca. Political refugee Angelotti commits suicide in a well after being tracked down by the terrorist regime’s policemen.

Caravadossi, the artist and comrade-in-arms, is executed by firing squad after being tortured in the garrot, when he was told that blanks would be used. (Whew, that story has recently become uncomfortably topical).

The lowly police chief Scarpia is stabbed to death during an attempted rape in his headquarters, and exhales in a pool of blood on the marble floor of the elegant Palazzo Farnese.

Tosca escapes capture by leaping from the top of Rome’s Castel Sant’Angelo fortress, and is crushed to the ground after falling from a great height. Splat!

As you sit there in Prague’s beautiful State Opera, wiping your brave operatic tears from your cheeks, you might wonder whether Tosca should always be performed as faithfully as it is here. After all, does it make sense, now and then, to interpret and challenge the masterpiece in its structure and location?

In Salzburg, at last summer’s festival, I attended the Anna Netrebko version, in which Scarpia survived the stabbing (Tosca’s Kiss) and appeared on the roof of a luxury hotel in the final scene, to slap her down in the company of a group of Hitler youths I never quite understood where they came from.

Lately I’ve been reading about director-provocateur Martin Kušej’s scandalous version in Vienna, which some call The Worst Tosca Ever and others love as a novelty.

An incredibly brave and brutally ugly Snow Tosca stripped of art, Rome and religion, with severed body parts dangling from naked trees, a lecherous, masochistic Tosca, possibly with Stockholm Syndrome, an Angelotti nailed in blood, wandering in the snow and near-violent boos from the audience to the theatre director’s undivided satisfaction. Now that was a hell of a punch line! Maybe it’s good to shake the bag now and then. Isn’t that the raison d’etre of art?

Here in Prague, things were different in the traditional way, and I was particularly struck by the set design, which is iconic for this particular theatre.

A set created by the world-famous Czech Josef Svoboda way back in the 1940s and reconstructed in the 1990s.

A breathtaking display of black and white giant photo posters of the three classic locations – the church of Sant Andrea Della Valle, Palazzo Farnese and the top of Castel Sant’Angelo. All motifs composed in wild, disrupted angles that support both the Renaissance aesthetic and emotional chaos of the narrative.

The soloists this evening drove it home on routine. Best was Scarpia, sung by Krzysztof Szumanski in a demonic, charming version that’s just before Tosca could have fallen in love willingly. There is, as we know, something about men and power.

Tosca was sung by Ewa Vesin with great exuberance and prima donna power, but perhaps lacked the tenderness of the Vissi d’Arte aria that can bring down a hall. Caravadossi was a valiant Corona Vicariate who, after a slightly pressured start, sang E lucevan le stelle so that the little hairs stood up. That aria presses so hard on my Puccini pedal that I shudder after just a few bars. What’s going on with that.

The audience is well dressed in the Prague Opera, lots of beautiful dresses, flashing brilliants, tuxedos and sharp suits. Champagne and canapés at intermission complete the experience. Bravi tutti! 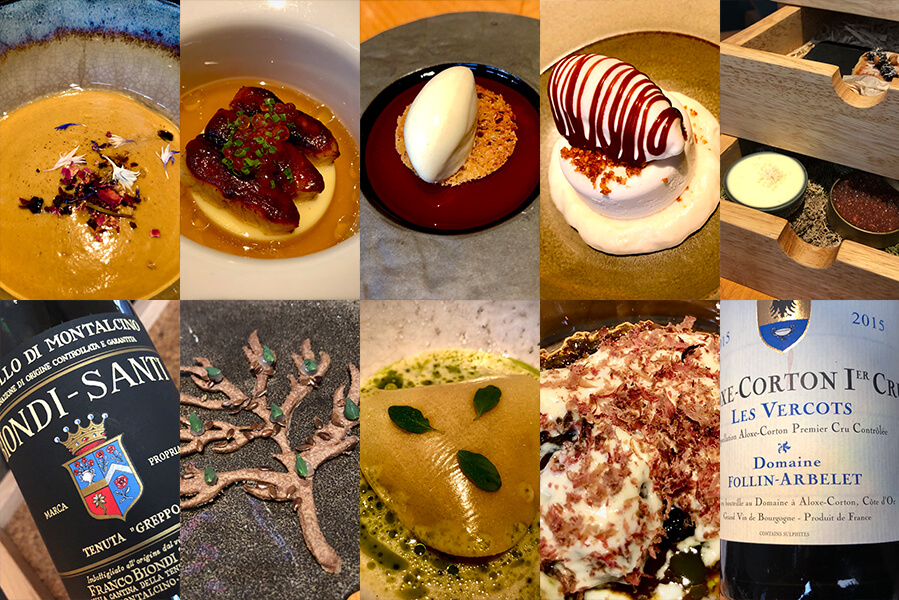 Field is a gourmet must in Prague. Chef Radek Kašpárek has scored a fully deserved Michellin star for his dogged focus on modern cuisine with sharp presentation of ingredients and ingredients. He doesn’t shy away from turning up the flavour, surprising with new versions of otherwise familiar dishes.

The decor is Scandinavian/simple, with a cozy, rather acidic slideshow in the ceiling and a completely modern, bright red, glossy plough pinned to the wall. Ok, it’s a field. In my opinion, Field is rapidly heading towards M-star #2.

I visited the restaurant for lunch and opted for the Degustation menu, which turned out to be a showcase of culinary artistry and flavor. You get it right here without superlatives.

I opted for the upgraded wine pairing and was served Biondi Santi 2006 and Aloxe-Corton 2015, which together with dessert wine from Donnafugata brought tears to my eyes of wine joy.

The price for the whole experience was perhaps a little steep for Prague, but this is Eastern Europe and you can still splurge for reasonable money.