REVIEW: NABUCCO AS A SOFT MAN IN ZURICH

Nabucco is one of Verdi’s first operas, and the one with which he made his breakthrough as an opera composer in the 1840s. Rossini had given up his career, Bellini had died, Donizetti was ill with syphilis, and his rivals had thus left the way open for a new star.

Looking at Verdi’s work as a whole, it is clear that his masterful grasp of the operagenre only manifested itself some time into his career, around the period when he wrote Rigoletto, The Troubadour and La Traviata in quick succession. Operas that are among the world’s most popular and most frequently performed.

Nabucco is probably the only work in opera history known for a choral movement rather than a languorous aria.

You’ve already guessed that it’s about the Slave Chorus, in which the exiled Jews sing of the hope of returning to the Holy Land. Fly thoughts, on golden wings, as it is sung (Va, Piensa.)

Il Risorgimento, after the country had been partially occupied by both Napoleon’s France and the Emperor’s Austria.

No more submitting to foreign rule. If you can think it, you can do it.

Zurich Opera director and stage director Andreas Homoki has staged a stylish, aesthetic Nabucco that, in keeping with Homoki’s preferred touch, focuses heavily on the psychology of the characters’ internal struggles, rather than a lot of external bluster.

The set consists of a gigantic green marble monolith that fills the entire diameter of the revolving stage and runs non-stop 360 degrees around, with the possibility of a flying change of cast and ambience every time the plate is turned a turn. Simple, beautiful, and… simple.

A slightly confusing, biblical plot where Nabucco (Nebuchadnezzar) drives out the Hebrews and later lets them back in, gets twisted around a bit, disassembled and put back together with the theme of the Italian reunion.

Expelled Jews from the Middle East or stateless northern Italians from Lombardy. Same same, but different.

The concept is perhaps sought after, but also obvious in the Verdi context, and it probably works a little better on paper than in reality – even if several of the show’s tableaux are spectacular in their mass choreography and ongoing cross movements. Large-scale and beautifully executed .

Nabucco is king and warrior, but not least the devoted father to his two daughters, an angle that gets particular focus in this production.

Together they get tangled up in an intricate power play, with a somewhat predictable romantic drama thrown in.

The daughters Abigaille (Anna Pirozzi) and Fenena (Alisa Kolosova) are sung with bravura. They even resemble each other like two drops of water, in beautiful green dresses that match the monolith, and a rather hefty battle weight that in places provided an unintentional discourse, and opens the debate on fatshaming versus role identification.

The persistent psychological pressure on the father leaves him much of the time in the role of soft man with a king’s crown, about to lose it all on the floor.

As the tormented Nabucco, internationally acclaimed baritone Luciano Gallo delivers the best vocal performance of the evening in a show that lacks bite and doesn’t quite hit Zurich Opera’s usual high notes.

The set is beautiful but also somewhat monotonous – the whole performance, on the other hand, is bathed in an incredibly beautiful lighting design by Franck Evin, whom Homoki also let shine in his great Bregenz staging of

Madame Butterfly, which I saw in August.

But that’s another story as you can read below. 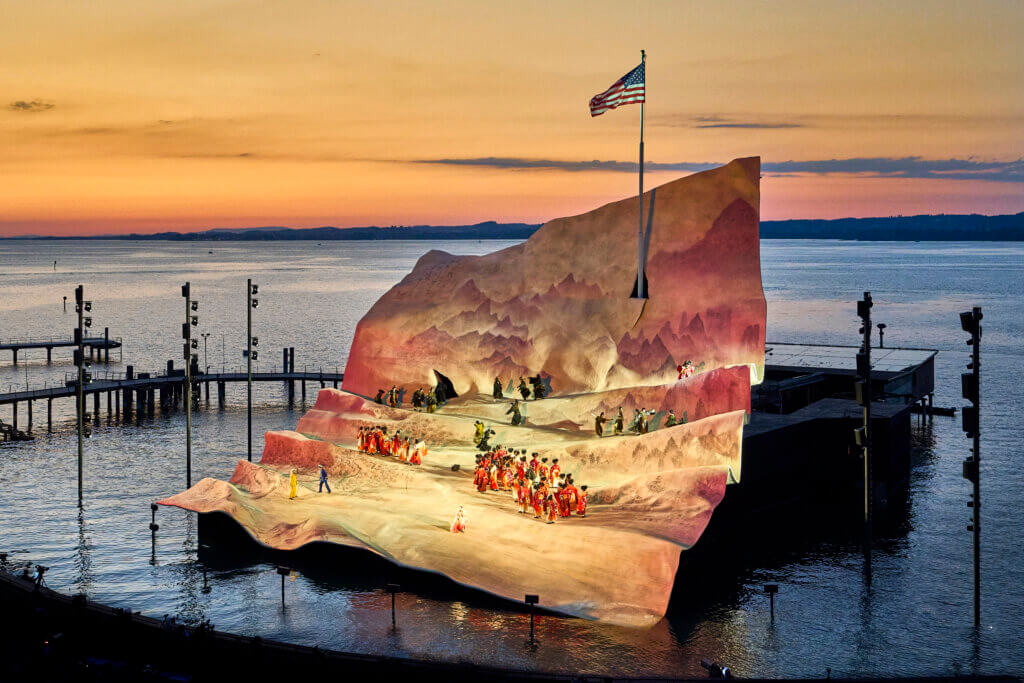 A gigantic flagpole with the American Stars and Stripes on top erects through a piece of crumpled paper weighing about 300 tons.

That’s how you rape a mastodon paper sculpture with references to Japanese origami that establishes itself as the stage for a large-scale outdoor version of one of Puccini’s most poignant melodramas.