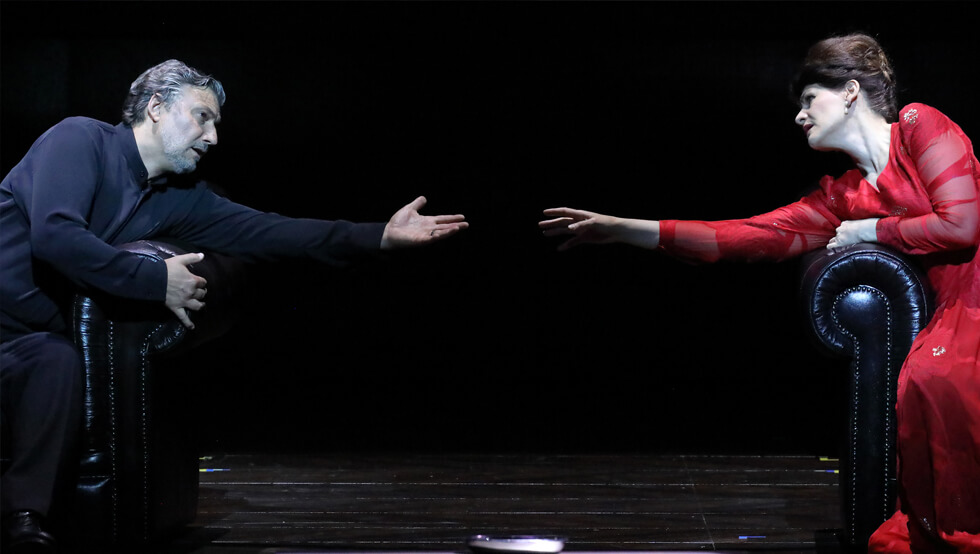 A star-studded cast enthrals the audience at the gala première of Tristan and Isolde at the Munich Opera Festival.

Tristan and Isolde is an iconic work in operatic history.

The opera’s fame is due not least to the fact that through this work, Wagner revolutionised classic music and heralded a new philosophy of music.

Wagner pioneered an unprecedented and complex use of chromatics and orchestral colours. He ‘painted’ with dissonant chords, intelligent disharmonies and unresolved cadences.

The so-called Tristan chord is the most famous chord in music history (eclipsed only by the Fadd9 on George Harrison’s 12-string Rickenbacker guitar that kicks off the Beatles’ classic, A Hard Day’s Night).

Tristan and Isolde marks the advent of a movement away from conventional harmony and tonality towards more complex sound images that are ideal as soundtracks – which explains why Wagner’s music features as a backdrop of sound for so many films.

The best known example is probably The Ride of the Valkyries accompanying the napalm-dropping armed helicopters in Coppola’s Vietnam blockbuster, Apocalypse Now.

Lars von Trier demonstrates his sense for the lyricism of collective annihilation in Melancholia, my favourite Trier film, the sentimental glory of which is swaddled in mythical and monumental music from Tristan and Isolde.

Let’s get back to the Munich Opera Festival – or the Bayerische Staatsoper Festspiele, as it is officially known.

Jonas Kaufmann is one of the greatest tenors of our time – up there with Domingo and Pavarotti.

Kaufmann is a star who fills the house. He was born right here in Bavaria’s capital city and makes his début as Tristan in Wagner’s iconic opera, performed for the first time here in Munich in 1865.

The die are cast for a tremendous victory on home ground.

With typical German efficiency and COVID-antagonistic chessboard seating, the opera house seats 900 people, although it would normally accommodate an audience of more than 2000.

The dinner jackets, statement gowns and sparkle of precious stones signal that the Southern German elite has gone to town. Suffice to say that I get a delightful sense of rubbing shoulders with the toffs.

Tristan and Isolde is (of course) an impossible love story on the lines of Romeo and Juliet.

Tristan is a knight honoured with the task of escorting the beautiful Isolde on her journey by sea to King Marke. The king impatiently awaits the arrival of his bride-to-be. The match is part of a peace agreement between Ireland and Cornwall..

However, en route to this politically motivated forced marriage, Isolde succeeds in giving Tristan a dose of love potion that will bind them together for eternity. And then the trouble starts.

For tactical reasons, the blossoming love affair is doomed – Tristan and Isolde may be united only in death.

Liebestod (Love-Death) is a common theme in Wagner and one that was de rigueur in the Romantic Era. For other examples, check out The Sorrows of Young Werther and Elvira Madigan.

Wagner wrote Tristan and Isolde in a break from his work with The Ring. It is believed to have been inspired by one of his own love affairs. Wagner won the heart of a lady who was married to one of his benefactors. Nobody died as a result.

Wagner was a rebellious chap, a revolutionary in both art and politics – and moreover something of an eccentric who adored the colour pink – the dominant hue in the décor of Wagner’s opulent home and hand-made silk underwear.

This was a side of the composer that Hitler presumably played down. The Führer was enthralled by Wagner’s music and the concept of German superiority.

In the past people claimed that, like the Nazis, Wagner was an anti-Semite. However, Wagner’s brand of anti-Semitism was probably no stronger than was usual in many circles of the German population in his time. (Today, we’d probably call this “an inconvenient truth”.)

Much has been written on the issue. A Google search of the word “Wagner” comes up with 173 million hits in 0.8 seconds. Go ahead and read!

Another role débutante, soprano Anja Harteros, sings Isolde, a powerful and passionate performance. Meanwhile, in the first half of the performance, Kaufmann’s beautiful tenor seems a little lacking in volume and character to achieve real Wagnerian vigour.

Towards the end however, Kaufmann pulls out all the stops and creates pure magic.

I would not give many points for the stage design. In fact, an irate posse of upper class penguins booed the stage director off the stage during his curtain call. Something of a first, I think!

Munich audiences are demanding. Good opera is simply inadequate. Only the exceptional is acceptable here. If not, it’s GET OFF!

The scenery for the first act was poor and unimaginative with the exception of some fine video sequences, not least those showing Tristan and Isolde drinking what they believe is deadly poison, but which turns out to be a love potion – at which point psychedelic patterns swirl across the scene.

For the second act, four heavy Chesterfield armchairs are plonked slap bang in the middle of something akin to the inside of a cigar box – or is this all intended to symbolise a coffin?

The libretto, which harps on philosophical rather than dramatic strings, dwells on an exchange of ostentatious romantic platitudes.

The entire libretto rests on the idea that Tristan og Isolde’s hopeless love affair is so grand that it has to be enveloped in a solid mass of darkness that reflects its immortality.

In the Romantic era around the 1860s, such pathos probably found resonance, along with the concomitant wave of ebullient nationalism that was later to have such dire consequences.

Today, the message seems outdated, to say the least.

Although tinged with a smidgeon of Wow, where did that come from?, an emblematic video sequence shows Tristan and Isolde lying on a bed while water slowly engulfs the room.

The lovers awake suddenly, on stage and in the video – as King Marke and his entourage burst in and catch them red-handed, floating in a sea of passion.

It all ends in a duel, where Tristan throws himself onto his opponent’s sabre to atone for the dishonour he has brought on himself and his king. And when, some considerable time later, he finally dies of his injuries, Isolde arrives just in time to join him in death.

The grief is crushing, eternal love is a fact, the music is awesome and the long-awaited summit meeting of opera stars just about meets our expectations, provided that we turn a blind eye to the somewhat uninspiring stage design. 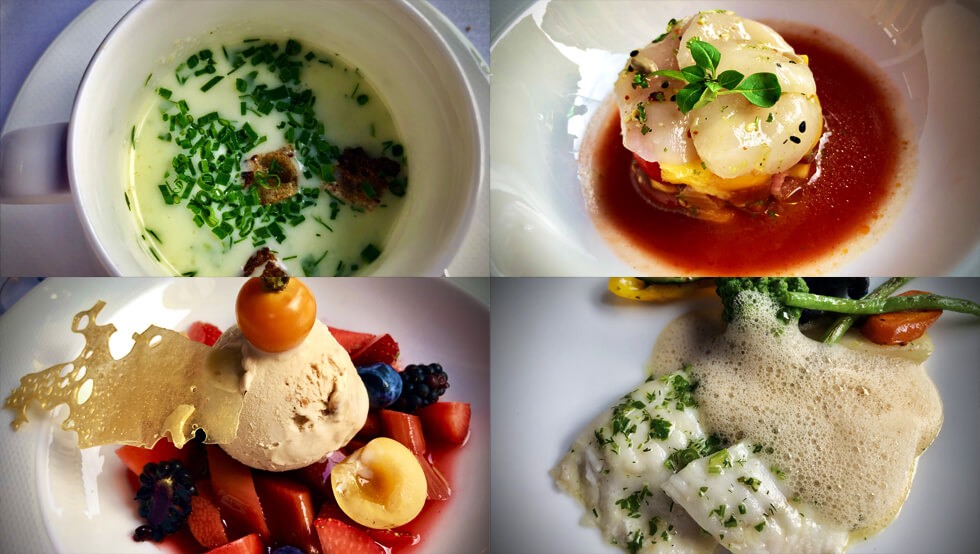 Close to the Opera House nestles Restaurant Schuhbeck. It is managed by one of Germany’s most celebrated chefs, Alfons Schuhbeck. Aside from being a German gastronomic celebrity, Schuhbeck is also a big fan of the Bayern München football team.

I watched him dribbling between the tables, sporting a chef’s jacket embroidered with the club’s logo with stars and all the trimmings. I seem to recall seeing our own Danish football team chef Per Thøstesen from Bistro Bohème on TV, wearing a similar, perfectly embroidered DBU (Danish Football Association) logo.

As for the food, both chefs top the premier league.

The first touch was a simple creamy Jerusalem artichoke soup garnished with chives and crispy croutons. This was followed by an uncommonly lovely dish of raw marinated scallops in an exorbitant cold gazpacho made with tomato, mango and rhubarb.

My taste buds were then treated to a beautiful fillet of sea trout basking in a froth of mussel sauce.

Just before the final whistle, I enjoyed a classic dessert of rhubarb, strawberries and blueberries served with hazelnut ice cream.

An excellent mineral Riesling played a full 90 minutes, after which I substituted a glass of exquisite Beerenauslese in injury time.