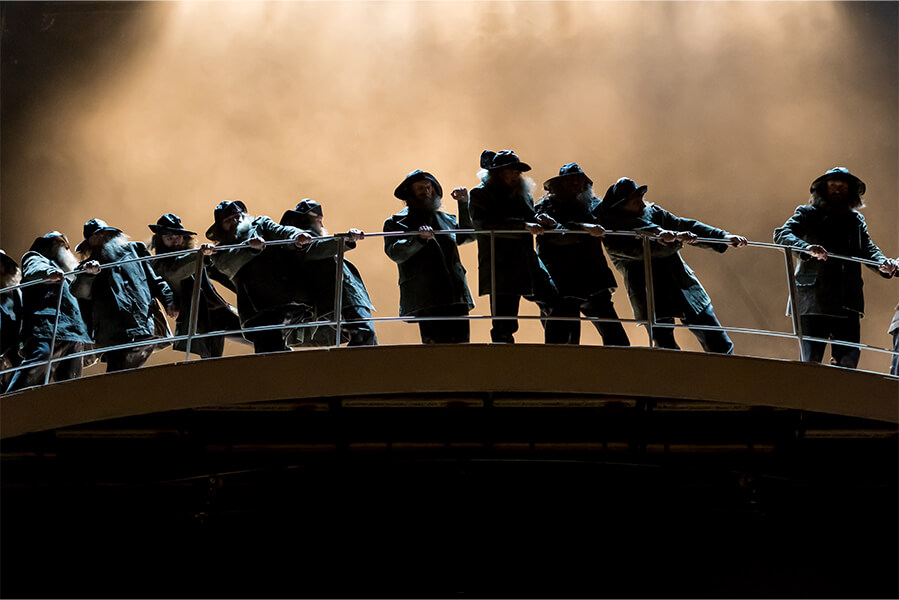 While Hurricane Malik was raging in Denmark, the waves were high in Prague, where The Flying Dutchman was treating audiences to a rarely seen performance of power and grandeur.

A gigantic revolving stage, shaped like a slanted platter, portrays the ship’s bustling bridge, its misty decks and stormy ranks – and the rocking cabins of the sailors.

With a turn of the dial we find ourselves in the dormitory, which the female lead Selma unsurprisingly turns out to inhabit, along with a host of other boarding school-clad young women who don’t mind a good pillow fight.

Hey hey, you’re thinking, doesn’t Selma usually live with her father, the sailor, in their spartan Norwegian seaside cottage – inspired by the nightmare journey Wagner had fleeing Baltic creditors, caught in a storm in the North Sea on his way to England…

Not in this production, which illudes Selma’s Dream, and therefore allows associations and imaginations to run free.

The technical turntable-wonder of obvious Wagnerian impact, proves, whatever else one thinks of this free-thinking of Wagner’s classic, to be an ingenious stage device which, because of its slant, can both hide the ‘back’ surface and open itself up again to the audience with new set pieces and performers.

Ingenious in its simplicity and overwhelming in its gigantic dimension, filling the entire stage space of the grand Prague State Opera, where this Flying Dutchman has landed.

The staging is by Norwegian theatre and film director Ole Anders Tandberg, who has won a host of awards for his opera productions, mainly in Norway and Sweden. It is well known that he also has a degree in architecture and often constructs his own sets.

On stage, he entertains the most powerful and voluminous singing team I can remember.

As the Dutchman himself, it’s German Joachim Goltz in a coddled Goth outfit with a long leather coat and Death Metal hair, shattering the brass with a baritone of storm force.

As Daland, the father of Selma, the woman’s love about whom it’s all about, Zdenek Plech is on deck at a fighting weight of around 160 kilos with a doomsday vocal that can whip the sea into foam. Certainly a full and versatile Czech cousin who has been part of the cast of Cats as well as writing music for several musicals himself.

I don’t disagree with the Czech critics who criticize the show’s incessant pursuit of powerplay and decibels – which naturally blow overboard any attempts at slightly more lyrical nuances.

One might also point out that the dream concept allows for so many ideas, inventions and free interpretations of the plot that the action takes on a tangent and takes on water, to use the lingo. Well played Wagner – not entirely free of storm damage!

How does Senta, otherwise brilliantly delivered by the young, voluptuous soprano Dorothea Herbert, become so easily enamoured of the Dutchman that she will sacrifice her life, thereby absolving our martyred captain of the ignominious curse the gods have placed upon him as punishment for a moment’s blasphemy.

Why does he appear to be wearing white skirts under his raincoat? Why does the ghost ship’s cargo of glowing treasure come tumbling from the sky in tiny (supercute) parachutes at the end? Since when did Selma go to boarding school? There’s so much blowing around that the interconnections seem to evaporate.

Opera staging without grounding is not uncommon, and can be both spectacular and entertaining.

So too this Dutchman, remembered especially for its effective stage design. Never mind that the staging sometimes becomes unintentionally comic, as 20 tough sailors in the southwest walk up the revolving platform and come to look like something out of The Seven Little Dwarfs. The association clashes a little unhappily with the seriousness of the tale unfolding. But damn is it good! 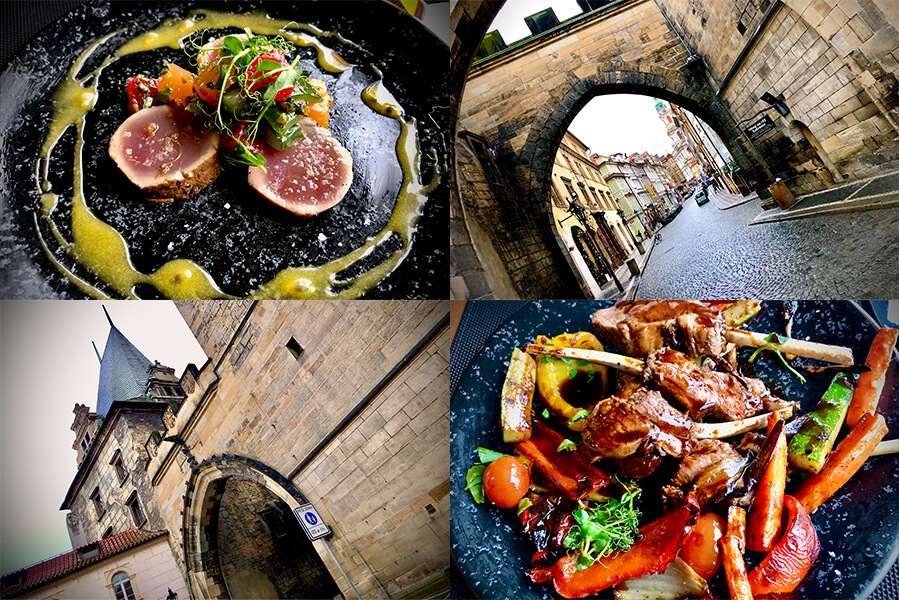 DELIGHTED ON THE RIVER

Marina is an absolutely lovely Italian restaurant in the slightly nicer department, with a beautiful location on the Vltava River, right next to the National Theatre.

Yep, the Marina is a riverboat, but it’s built where it is and can’t sail. So you know where it is.

From the Marina, you can look out over Prague’s Old Town, with all its dollhouses, winding streets and castle atop the soft hills that surround this central European gem, which still looks like a slightly battered version of Vienna. The Communist era is still spoken of in derisive terms.

The world’s largest Stalin statue, 15 metres high in granite, was erected here and was more expensive to demolish than to build. The hideous monument had to be blown up with copious amounts of dynamite.

First, Stalin’s head tumbled miserably down the hill and was pulverized into the paving that lies on the road today. Here the sarcastic Czech people enjoy trampling on the Communists and the damned Red Years.

The Charles Bridge crosses the Vltava a few hundred metres from the Marina, gracing the view that can be enjoyed with drinks on the upper deck – or you can get a window table on the restaurant deck, a few steps down.

I was recommended the Marina by the Prague Opera’s press department, who know how to establish a friendly reviewing mood before theatre time. It succeeded 100% even though the weather was miserable and the fine view hard to see, through a stiff gale of rain sleet and small frozen haze.

It’s freezing cold in Prague in January. Do visit Prague in the warmer months.

That’s when you’ll get your money’s worth in the cosy beer houses and wine bars that line the picturesque canals jutting into the Old Town from the Vltava.

The menu at Marina is Italian international, the decor modern with an open kitchen and hallway.

I had beautiful slices of tuna, just turned on the pan and served with tangy mango that dressed.

Scruffy as I was, after an excellent guided bike ride, I opted for a round of lambchops, which were exceptionally well prepared. Tender with a fine roasting crust, perfectly medium, juicy with no blood. I had really good ratatouille for the garni and was greatly pleased with my choice.

A large glass of Czech Pinot Gris was a polite, local choice and excellent without being ostentatious.

I say thank you very much for a perfectly satisfying, uncomplicated meal with an appropriate boat theme before the trip to the Flying Dutchman. Bon appetite.