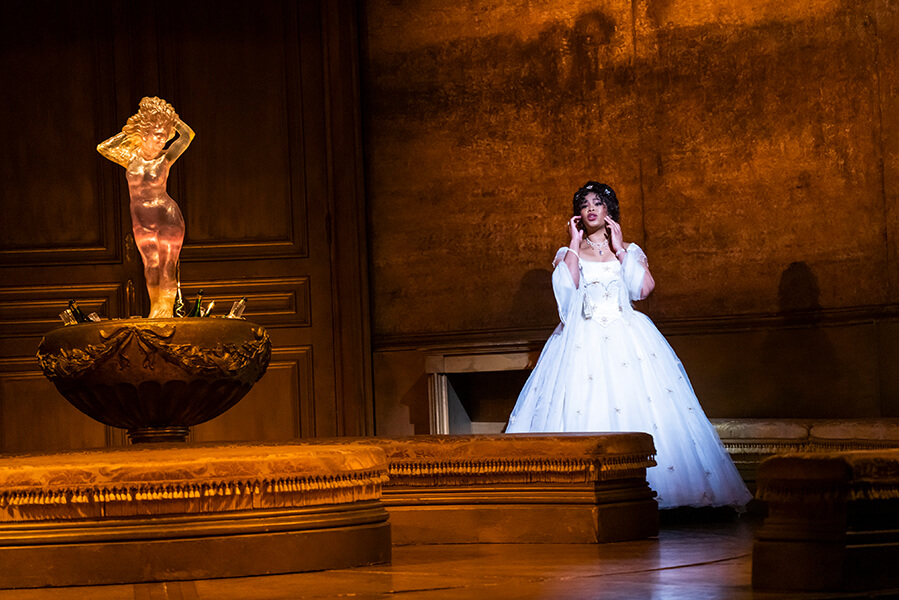 Pretty Yende is a smash hit in the title role of the fallen woman La Traviata at London’s premier opera house.

The dark, South African star soprano with the warm voice and magnetic charisma, brings the house down with her almost show-stopping, equilibrist coloratura in Verdi’s most performed masterpiece, with a regular hit parade of operatic evergreens.

Time after time, Pretty Yende causes the hall to erupt in acute applause and enthusiastic shouts of bravo. The audience loves her from the first note – and she loves her audience.

Not a bad cocktail on this spring evening at Covent Garden, where the ROH (Royal Opera House) kicks off its reopening with a series of the opera genre’s most popular works in a changing star cast.

In fact, there are no less than three different casts in play for this La Traviata, which thus both spoils the discerning English capital audience and seems guarded against corona cancellations, with easy access to top-level practiced understudies.

Symptomatically, the lovelorn Alfredo’s humble father, programmed with the highly acclaimed Greek baritone Dimitri Platanias, had to be last-minute doubled by the substitute Vladimir Stoyanov, who, however, proved to be responsible for one of the evening’s most convincing vocal performances.

English director Richard Eyre is one of the biggest names in the international opera and theatre world, with plenty of success both on the silver screen and as a TV and film director. He has won major roles and prizes – including six Oliver Awards.

Eyre’s 1994 debut at London’s Royal Opera House was La Traviata, a production that is still so beloved that it draws full houses. The production is 28 years old, so trust it’s got something. Eyre is now 79.

His take on Verdi’s perhaps greatest hit is absolutely classic, which swings in sync with the conservative London audience that our own Kasper Holten apparently had his challenges with, in his time as director of ROH.

The story is that of the Lady of the Camellias from Dumas (The Younger’s) novel. The deadly Parisian courtesan Violetta falls in love with a young, naïve poet laureate, but is forced to renounce love so as not to disgrace the poet’s handsome family.

All pressured by bad timing in a situation where Alfredo’s sister is about to be married up the social hierarchy. Dad intervenes, and things go wrong.

It’s complicated, but somehow also based on such suitably understandable reasoning throughout that you can easily find yourself in the emotional register that marinates the tragic story.

After all, it is this identification that continues to make La Traviata relevant. Even if some English media have criticized the show for being conformist and taking too few risks.

When forgiveness and reunion finally make themselves felt, it is of course too late. Violetta exhales with a bloody cough in the tear-jerking grand finale.

Beautifully served it is, too. The first act’s party scene is a dream of elegant costumes and classic Parisian interiors in golden colors. The soundtrack as beautiful as Caravaggio’s.

Dark Pretty Yende in white jeweled ball gown is an alluring sight, as well as a musical treat. Write the name behind your ear and don’t miss the opportunity to hear her when it arises.

The second act’s chandelier scene dips a bit in staging but offers some of opera’s best arias in return.

Nobly, sensitively and movingly delivered by Pretty Yende as Violetta, flanked by the American, perhaps somewhat shrill-sounding bel canto-type tenor Stephen Costello as the smitten but also rather cracked Alfredo.

Strongly remembered is Bulgarian Vladimir Stoyanov as Alfredo’s hands-on father, who enlists to end the relationship and safeguard the family’s reputation.

Things get really blistering in a wildly spectacular third act where the set, like an intelligent interpretation of a bullring, embraces yet another party of the Parisian upper class.

Sumptuous, visual operatic feats from set designer Bob Crowley in a dynamic and entertaining staging that you just lap up.

The mausoleum-like set of the finale makes the death scene just as crushing as it needs to be.

The young Italian Giacomo Sagripanti, called one of the most exciting conductors of his generation, leads a distinguished, well-performing orchestra that wrings the best out of Verdi’s at once celebratory and poignantly melancholy score.

It’s right in the eye. 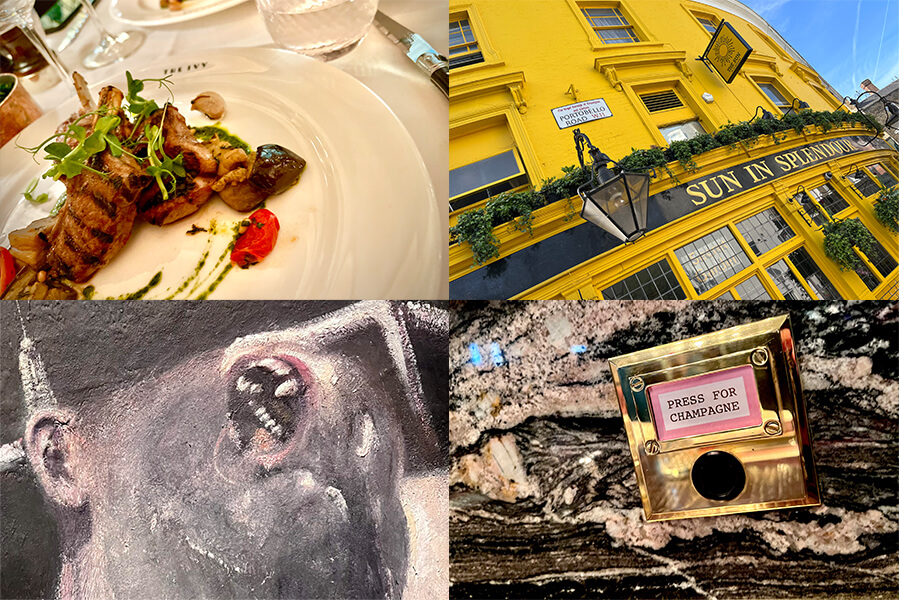 I was prepared for a London brought to its knees by Brexit and exhausted by Corona. Oh dear, how wrong I was.

London is back in full swing with so much life and so many people everywhere, it’s almost too much of a good thing.

Don’t confuse the original with its little sister, the Ivy Market Grill in Covent Garden – you don’t have to be as blurry as I am.)

Ivy’s menu here around Easter offered immensely tasty Irish lamb, which I chose in concert with the house Special gin and tonic with cucumber strip, a must-try to start with, at this classic location.

If you’re artistically inclined, I suggest a visit to the fine exhibition of Francis Bacon’s disturbing works at the Royal Academy of Art in Piccadilly.

After you’ve finished your stroll down Carnaby Street, pop into the elegant eatery Bob Bob Richard, which has a press for champagne button at every table that’s practically impossible to keep your finger off. Fun place in the oyster/caviar prestige class with wild interior design.

Portobello Road market at Notting Hill is still excellent, bargain shopping and quite fun relaxation if you’ve remembered to take your Xanax.

Have a good trip.