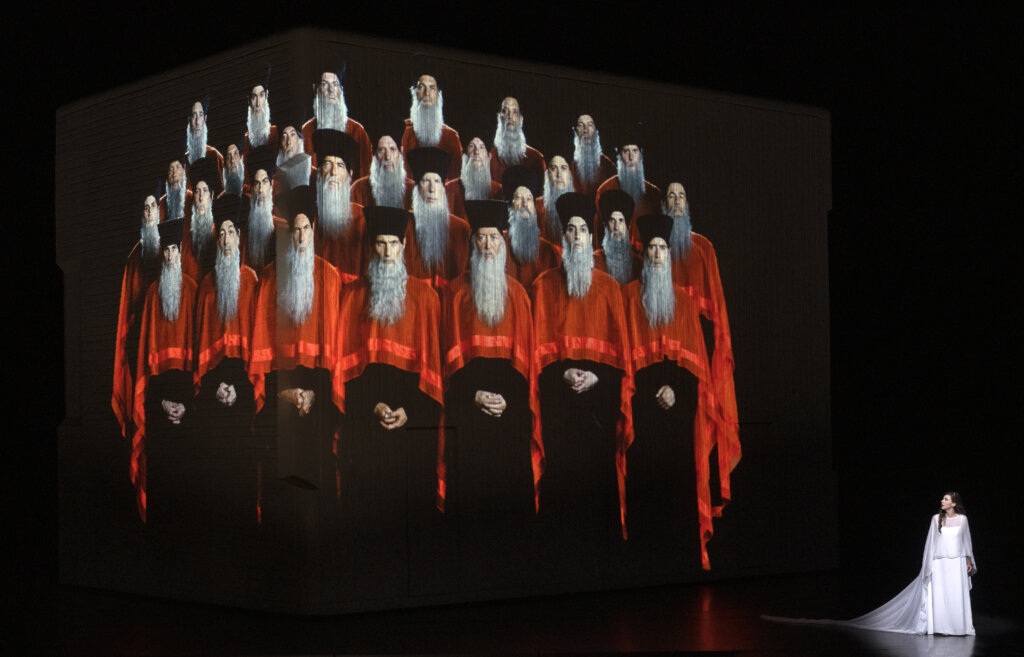 AIDA REVIEW: STAGE DESIGN OF THE YEAR in SALZBURG – TOO BIG TO FAIL

At first glance, the stage is set in and around a grotesquely oversized marble flamenco box of the kind you get groceries brought in from the supermarket, but which of course turns out to be the bare tomb that will be Aida’s final resting place.

Added as a kind of meta-scenography are enormous video projections of Middle Eastern colour, icons and narratives – perspectival signature visuals of various thematic and arty natures.

Together, they form a sumptuous setting for Iranian-born, New York-based video artist and photographer Shirin Nedhat’s grandiose staging, an updated re-imagining of the 2017 edition here from Salzburg – the esteemed artist’s first opera staging.

The staging, however, can’t help but get a bit lost in its Middle Eastern symbolism, mixing boat refugees, creepy niqab-clad female choirs and long-bearded Greek Orthodox clerics into one big Middle Eastern stew.

If the ulterior motive seems a little made, however, one can rejoice in a production that astounds in size and impresses in its star-studded cast, headed by Piotr Beczala.

Genuine Salzburg excellence is the order of the day when Polish world-star tenor Beszcala, in the role of Radamés, the Egyptian commander and traitor-in-love, lives up to expectations to the hall’s loudest enthusiasm in the well-known Aida aria, which is among the well-known ear-grabbers of this Verdi classic. Then you just heard the Salzburg audience rattling tactfully with the jewels.

Perhaps best of all is Éve Maud Hubeaux, who shines in the great melodramatic part as the King’s daughter Amneris – perhaps the opera’s most tragic character.

How do you feel when your beloved would rather be buried alive with your rival than live in freedom and wealth with you? Aida is (of course) dazzlingly sung by Elena Stikhina.

The production is remembered especially for its pompous giant scenes with tight graphic geometry and set pieces so large I can’t believe how they got them in there in the first place.

If you have to be picky, it’s all somehow a little too huge to be really gripping. But my goodness what volume there is.

The orchestra is sublimely playing and the Aida horns in the well-known march pieces are hardly heard sharper or cleaner than here. The Vienna Philharmonic was conducted by Alain Altoglu.

The Grosses Festspielhaus, which sets the stage, is a slightly odd theatre space, more like a concert hall and lacking some operatic intimacy. The same is the problem at The Met in New York, but that’s another story.

5 stars for Aida in a production that is in every way too big to fail.