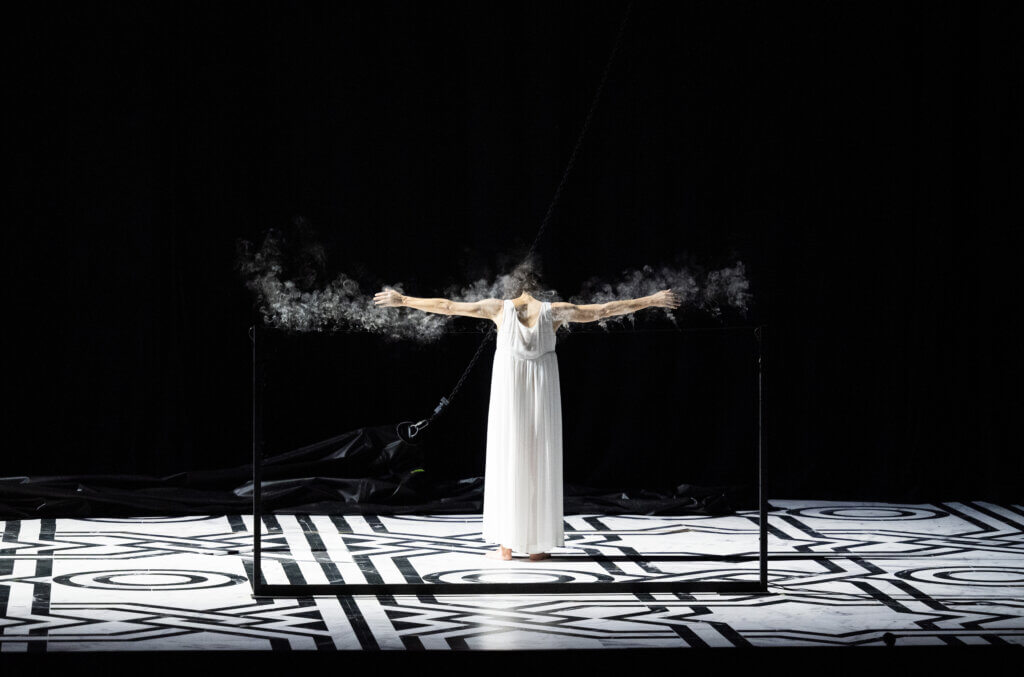 It starts with a stoning. Disgustingly effectively executed by a handful of religiously inflamed avengers dressed in black cloaks and white masks.

Soon after, a group of children are strangled by hand one by one until the life shivers out of them.

Resolutely handled by nine nun-like, shrilly screaming Sybils, prophets/oracles who invoke Old Testament dogma about a judging, punishing God who will, on the last day, separate the sheep from the goats.

The wicked must pay triple for their sins and suffer eternal torment in the fires of hell.

You may see before you the grotesque images of skeleton men dancing to death in purgatory by the Baroque painter Bosch.

Romeo Castellucci’s staging of Carl Orff’s Doomsday Oratorio is a wildly ambitious hybrid of concert and performance theatre, with a host of performers. The music thunders and roars in a series of high-pitched scenes you won’t forget right away, even if you wanted to.

The work had its world premiere in Salzburg back in 1973, with the legendary Karajan conducting. Even Polite newspapers like the New York Times describe it as a work rather few actually like.

The performance is a brand new, avant-garde dramatization of the oratorio that was the last from German-born composer Carl Orff.

To put it bluntly, it’s immensely self-indulgent and killingly long-winded.

Salzburg audiences have no idea whether to laugh or cry, despite the beautifully mass-choreographed, indisputably spectacular scenes in a thoroughly stylish aesthetic of doom that is so symbolic and visceral that you barely know what’s going on.

Tree trunks are raised like erect totem poles, chopped down with blue axes and dragged away.

An army of people, anonymized in skin-colored catsuits populate the stage at full width, terrified, lost and suffering as they await Judgement.

The music, a mix of strange soundscapes and manically repeted rhythms, added to apocalyptic screams and shrieks, has led some to call Orff a one hit wonder, with his famous 1936 choral/orchestral work Camina Burana the highlight.

In any case, it’s not obvious why Castellucci has chosen to pair his Duke Bluebeard in a double bill with this aggressively Christian vision of the end of the world.

The ulterior motive is revealed in part by an interview in the programme notes. The point is about how the opposites of the two works complement and intertwine, but it’s so academic that I have to pass on a simple explanation.

As doom seems to have set in, Lucifer steps forward, acknowledges his sins, extends forgiveness to all – and is soon able to take his place with the Lord again as the bearer of Light he was before he became Prince of The Dark.

Meanwhile, Judith and Duke Bluebeard from the first part of the double bill have come on stage to share in the general amnesty. All of this, of course, is set to choreography and musical accompaniment so full of pathos that even a hiccup would be spititual.

One German critic wrote that after the performance he just wanted a ham sandwich to regain some sort of normality.

One for me too, please.

PS. When researching Sybille in connection with the above, it occurred to me what a glorious, subtle insult John Cleese has subjected his Fawlty Towers wife to, throughout the series’ seasons, by consistently titling her ‘The Oracle’. This is something I understand better.