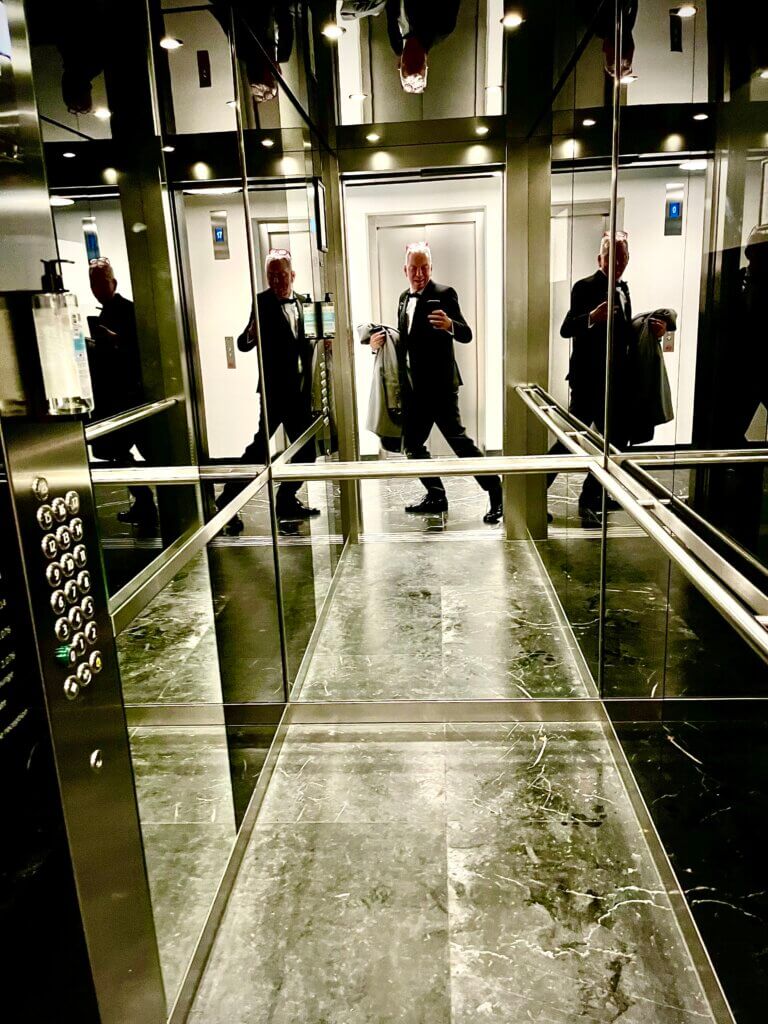 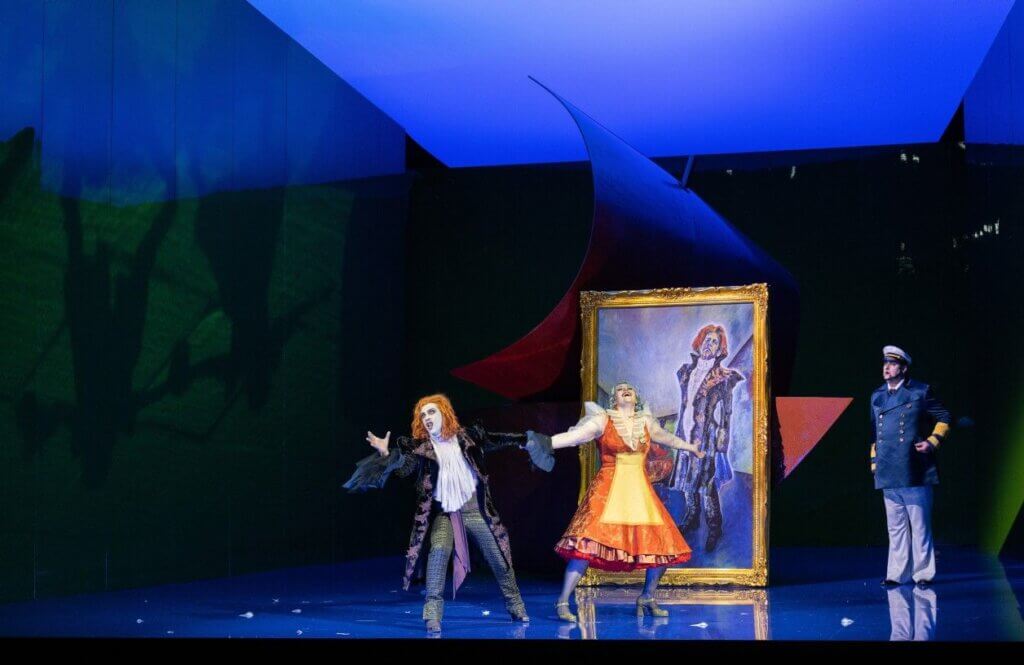 Thunderous tenor cheers whip down over Johnny Depp – I mean Günter Papendell – at the premiere of The Flying Dutchman in Herbert Frisch’s Pirates of the Caribbean spoof in Berlin.

Five stars for a deeply original staging of Wagner’s early event opera that insists on entertaining with unbridled displays of all the flabby touches the Komische Oper has made its trademark.

A flying Dutchman with long, sexy locks in pang-orange, disguised as Jack Sparrow from the beloved Pirates-Hollywood franchise, launches Wagner’s love drama as cartoon opera with shameless references to cartoonish comedy with plenty of naughty and festive flirtation.

Does the madness make sense? That’s certainly debatable, but the entertainment is undeniable, the orchestra on fire and powerful, the soloists of impressive quality and the choral work pure, unadulterated excellence, both vocally and in the performance of their humorously crafted group choreography.

Whether it’s the Flying Dutchman’s crew of hideous zombie sailors, or the well-seasoned, grizzled Captain Daland (Jens Larsen) and his slick crew of white-clad sailors, all of whom look like Gene Kelly & Co. from musical classics like Anchors Awaigh and On the Town – and all of whom are in the union, as they say.

Quite lovely and liberatingly out of context are the sailors’ expectant women with Japanese manga hair and lolita dresses in pale blue gowns, bonnets, puffy sleeves in billowing can-can feathers, and big pink bows around their waists.

But why? I have no idea – but it’s magnificent in Bettina Helmi’s imaginative costume design.

As we all know, it’s all about this hapless Dutchman, doomed to cross the oceans forever, only going ashore every 7 years in the hope of finding the love that can lift the curse.

The story’s point of no return occurs when the female protagonist Senta (Daniela Köhler) loftily declares that she is aware of the blessed duties of marriage and ready to enter into the redemptive love alliance with the Dutchman on 100% irreversible terms.

A statement that made quite a few women around me jump in their seats, for it is indeed here that Wagner launches into the enthusiastic, philosophical idea of liebestod, which he cultivated diligently in later works.

Time, thankfully, has run a little away from that idea, and so it seems not entirely out of place to replace outdated pathos with comedy of the more light-hearted sort.

The musical qualities are not tampered with, and it is an academic pleasure to listen to Wagner’s testing of the leitmotif technique that later became one of his musical signatures.

The Berlin press was enthusiastic, writing in part: the audience not only liked this modernised Wagner classic, the cheers exploded again and again in supreme enthusiasm.

Why Günter Papendell had to put up with a few, completely unnecessary boos to his Dutchman can only be explained by the wellknown rudeness of the Berlin audience.

Det Sku’ Du Se wishes you a safe journey to Berlin. The Dutchman is clearly worth the visit. 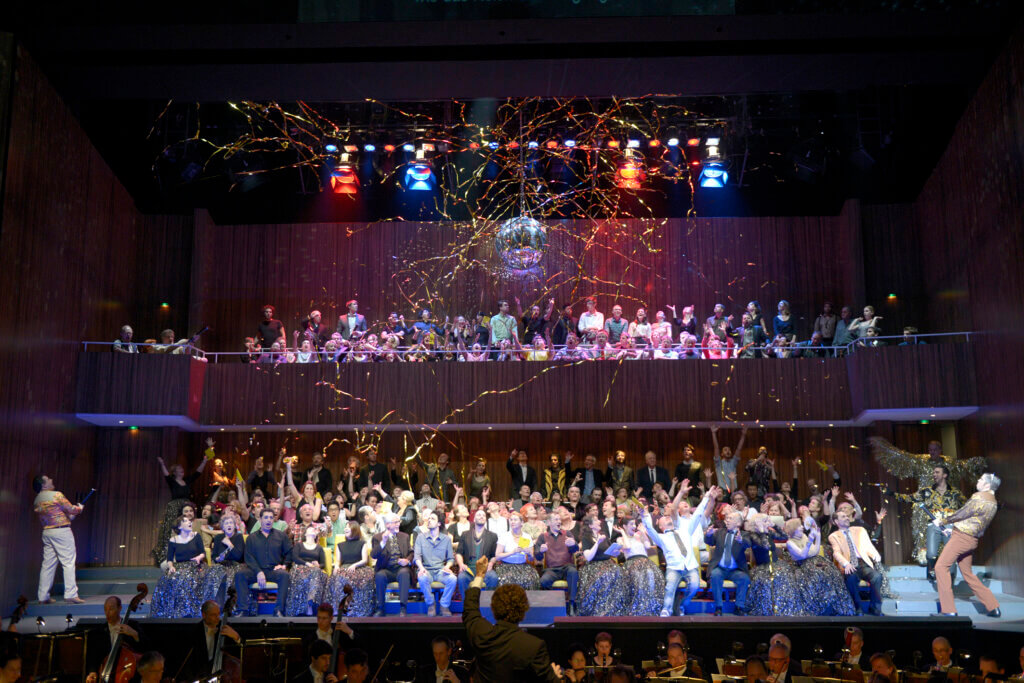 The singers are excellent in Jan Bosse’s stage design of Rigoletto, where otherwise it’s the controversial German director’s radical staging of Verdi’s sparkling operatic gem that stands to run with most of the attention.

No wonder the beautiful young singer is among the most sought-after of her generation.

She was nominated as Best Singer 2021 for the prestigious German Opus Klassik Prize and had the world press falling over themselves in Barrie Kosky’s Munich version of The Cunning Little Fox.

Keep an eye on the name and catch her if the opportunity arises.

In the title role, Korean baritone Leonardo Lee sings movingly and with believable sadness, with a darker tone than one usually hears from the troubled court jester, who in this production is rarely portrayed skin-deep as the desperate loser he really is.

Alone in the world with a job that makes enemies everywhere, and on the verge of losing the only thing he lives for to the cynical Duke’s unbridled lust for love.

One is no less scandalized when Rigoletto makes his entrance, disguised as a rabbit in a completely frenzied costume of fluttering gold lamé, soon after to insult all and sundry.

As the Duke of Matua, magnificently shaped in his ruthlessness, the lyric tenor Atillio Glaser shines, dressed of course in a tight-fitting silk shirt a la Versace, added to a fashionable array of Italian designer sunglasses.

Regie theatre it is to the fingertips, and you might get a little tired of all the creative discourse and pop modernisation if the result wasn’t so damn entertaining.

When all the goofiness is absorbed, you’re left with a sublime cast of singers – and orchestral playing of a high, high class that makes this evening of opera in Berlin both a charitable and inspiring experience. 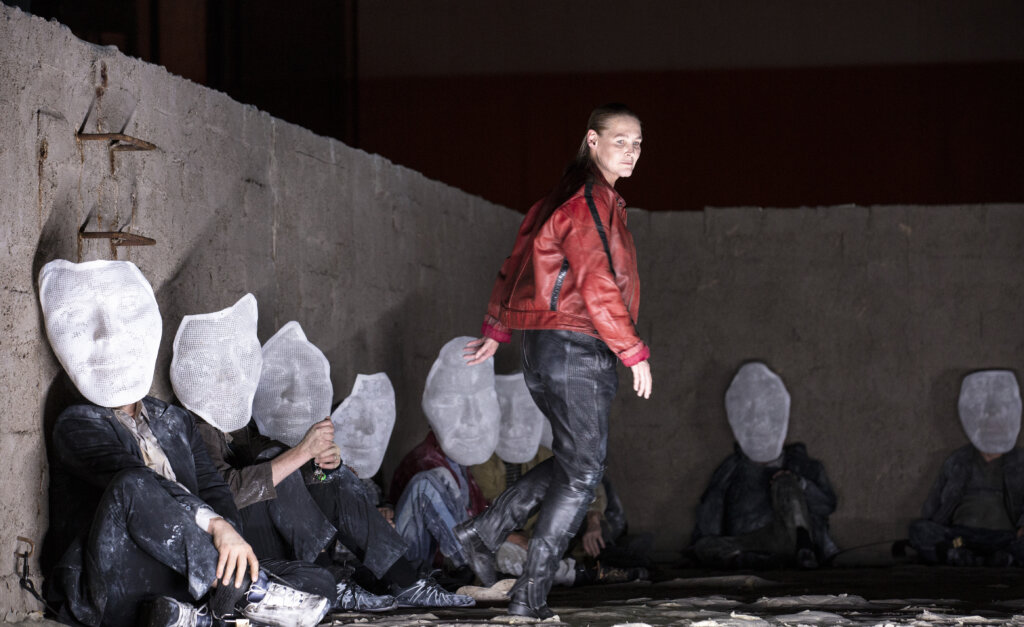 A deconstructed prison yard populated by captured rebels, incomprehensibly masked in white plaster masks a la something from the Easter Islands, soon has the Berlin audience sitting uneasily in their seats after Sir Donald Runnicle’s beautifully conducted symphonic overture to Beethoven’s only opera.

The Scottish General Music Director of Deutsche Oper since 2009 himself looks like a pop star a la David Gilmour, whose mere appearance in the orchestra pit heralds modernity and perhaps even avant-garde on this eagerly anticipated opening night, which unfortunately never manifests as much more than confusion.

Fidelio is and remains generally a problematic work which, despite Beethoven’s undeniable compositional super-talent (and numerous reworkings), never really settles into the operatic format.

The drama’s architecture otherwise has all the right lines, but there’s something about the whole thing that remains strangely introverted. Even at a time when Fidelio’s themes of oppression, political persecution and brutal displays of power seem urgently topical.

On the contrary, I experienced an unabashedly brutal audience reaction when the director and singers were booed out loud after the evening’s performance, which several German media accused of being unambitious, dubious in its execution of the grand metaphors, helpless in its half-hearted attempts at abstraction – and with its rip-wall-down symbolism downright outdated and out of place. Ouch for that one.

John Fulljame’s version of Fidelio received a similarly harsh reception at the opera a few years ago. You can read my review including various quite interesting background info here. https://detskuduse.dk/2020/10/02/fidelio-i-operaen/ 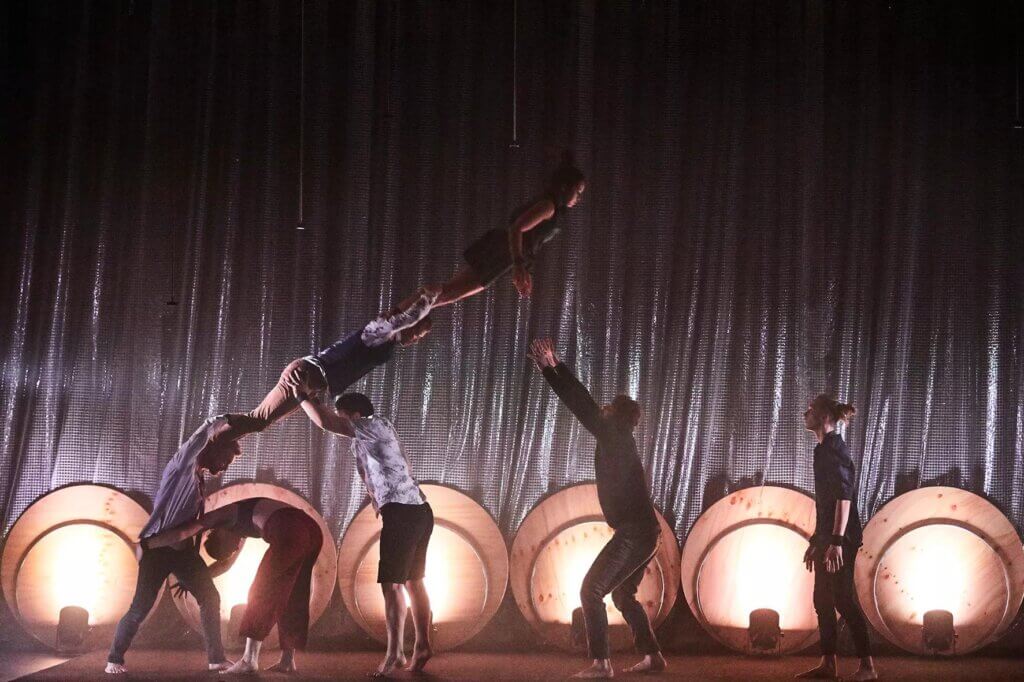 NEOCIRCUS AT CHAMELEON AND OTHER BERLIN TIPS

For something other than opera, check out Chamäleon in the famous Hackesche Höfe in the middle of überhippe Mitte.

Chamäleon performs new circus shows in a variety format, with serving at small tables in the hall and performances on stage in a surprisingly glorious venue that reminds a bit of Vega.

I saw the award winning show Out Of Chaos which is a kind of performance theatre, performed by a really likeable group of precision artists who call themselves  Gravity And Other Myths.

A kind of handstand acrobatics for the advanced, set to atmospheric live music, in which the performers build astonishing human sculptures out of their lithe bodies, jumping, leaping and soaring, making the audience shudder.

This performance settles on a chattering philosophical narrative, towards being a reference to birth and primal physics, colliding with intimate, verbal confessions and insights into what it feels like to be on stage in real time.

Some will find the conceptual underpinnings vehemently overplayed, but the entertainment doesn’t fail.

The program changes all the time, check it out online and have a fun night.

I would have eaten at new gourmet darlings Cookies Cream and Otto, but neither is open for lunch right now, so I enjoyed my usual reliable watering holes.

Bocca di Bacco, (semi-mundane Italian celebrity hangout), Borchardt (about the same only with a French twist) and Augustiner at Gendarmenmarkt (wurst & weissbier like in Bavaria.). Good reunions without more nonsense.

The Gropius Bau museum almost always has good exhibits, this time a mix called YOYI! distinguished by a computer-designed animated film of just under 20 minutes, featuring a whale’s POW showing a trip from the ocean floor up through the water to a redemptive somersault and a breath. Shown in wild quality on an 8 x 20 meters giant LED screen, you’ll be swimming in it. Cool.

The brand new, huge Humbolt Forum multi-cultural centre on Unter Den Linden presents, among other things, an exciting, superbly staged, interactive hi-tech exhibition Berlin Global which is at the top of the European genre, and clearly worth a visit.