With an immensely spectacular and almost infantilely provocative version of Händel’s Baroque masterpiece Guilio Cesare ) Spanish star director Calixto Bieito unquestionably lives up to his image as the Quentin Tarantino of opera.

We are only a few bars into the opera when the wife of Caesar’s political rival, Pompeo, is delivered the cut up remains of her murdered husband in a shopping bag. She performs the following arias wandering in agony as she hugs the slimy bodyparts, soon herself smeared in entrails, slabs of flesh and bloody locks of hair.

Behind her, a mysterious, giant, sci-fi steel cube, covered in semi-transparent video panels, fills almost the entire stage space of Amsterdam’s sold-out opera house, where the international opera press is in attendance.

No one yet knows that for the next nearly four hours, they will be treated to a 300-year-old baroque opera in a stunning, to say the least, modernist production design, borne of state-of-the-art digital stage technology.

A hi-tech desert paradise filled to the brim with generous amounts of ironically distanced sex, violence and abuse.

From the top of the box, which can both rotate on itself and be raised five meters in tilt mode with video on all surfaces, the opera’s leading roles perform (in safety line) while battle scenes and rapes play out on the stage’s foreground to the tones of razor-sharp, rhythmic baroque.

Fabulous, sassy mixed-media art or gesamtkunst you won’t forget in a hurry.

But which also makes opera traditionalists among the audience squint nervously towards the exit.

The plot is an elaborate one of political intrigue, power struggle and love. In the director’s view, the point is a discussion of how far one will go to gain absolute power – not unlike the theme of streaming hit House of Cards.

The cut-up corpse in the shopping bag that kicks off the action is a welcome gift from the Egyptian king to Caesar, who has come to Egypt to put rival Pompeo in his place and take control himself.

Caesar is not amused with the gift, which sets off an uncontrollable rampage of revenge and political bungling, with rich doses of beatings and sexual assaults in the open.

When Cleopatra is said, so is womanist – including womanist with more egregious violations, where the normal villain/victim role is reversed, for example when Cleopatra ‘seduces’ Caesar rather emphatically.

It all sits on the edge of comedy with Caesar dressed in tight-fitting suits, Cleopatra in fashionable red film star dress, women in luxury beachwear on designer sunbeds on the banks of the Nile – not to mention thesexy black kimonos with Egyptian-inspired gold ornamentation worn by muscular, soon-to-be undressed countertenors in homoerotic singer-meetings.

Emmanuelle Haïm is constantly on her toes in her conducting, calling forth a supremely sharp baroque in the well-performing orchestra, which benefits from excellent acoustics in the impressive opera hall. Rhythmic, tight and propulsive in the tempo movements, seductive adagio when required.

No wonder she is considered one of the most accomplished and driven Händel interpreters of her time.

There is much plot to be trawled through over the course of the opera’s nearly 4 hours. Bieito insists that not a moment go by without action, making the overall experience of the production extremely lively and perhaps a little overdone from time to time.

On the other hand, Julie Fuchs as Cleopatra, Cameron Shahbazi as Tolomeo and Christophe Dumaux as Caesar are particularly impressive through the many swirling coloratura – and in the sensitive, musical largos, where emotional depth is given space.

The excited audience frequently acknowledges with wild applause when the vocal gymnastic bravura numbers are executed at the highest level.

The finale contains a cheeky reference to Bieito’s scandalous 2012 staging of The Masked Ball, as Caesar and Cleopatra celebrate each other with largegift packages that turn out to contain gold-plated toilets. The interpretation is up to you and has to do with the critique of power.

Bieito lives up to expectations with a radically new take on this 1724 classic, in which every trace of period drama is swallowed up by astonishing technology, which admittedly also somewhat obscures the characters’ inner psychology.

In this Julius Caesar, he has left the comfort zone of ancient Egypt/antique Rome folklore beauty and gone for the provocative, designed to make us reflect on the nature of power.

Go To See This/Det Sku’ Du Se rewards the courage, the magnificent orchestra and the impressive vocal performances with 5 stars. 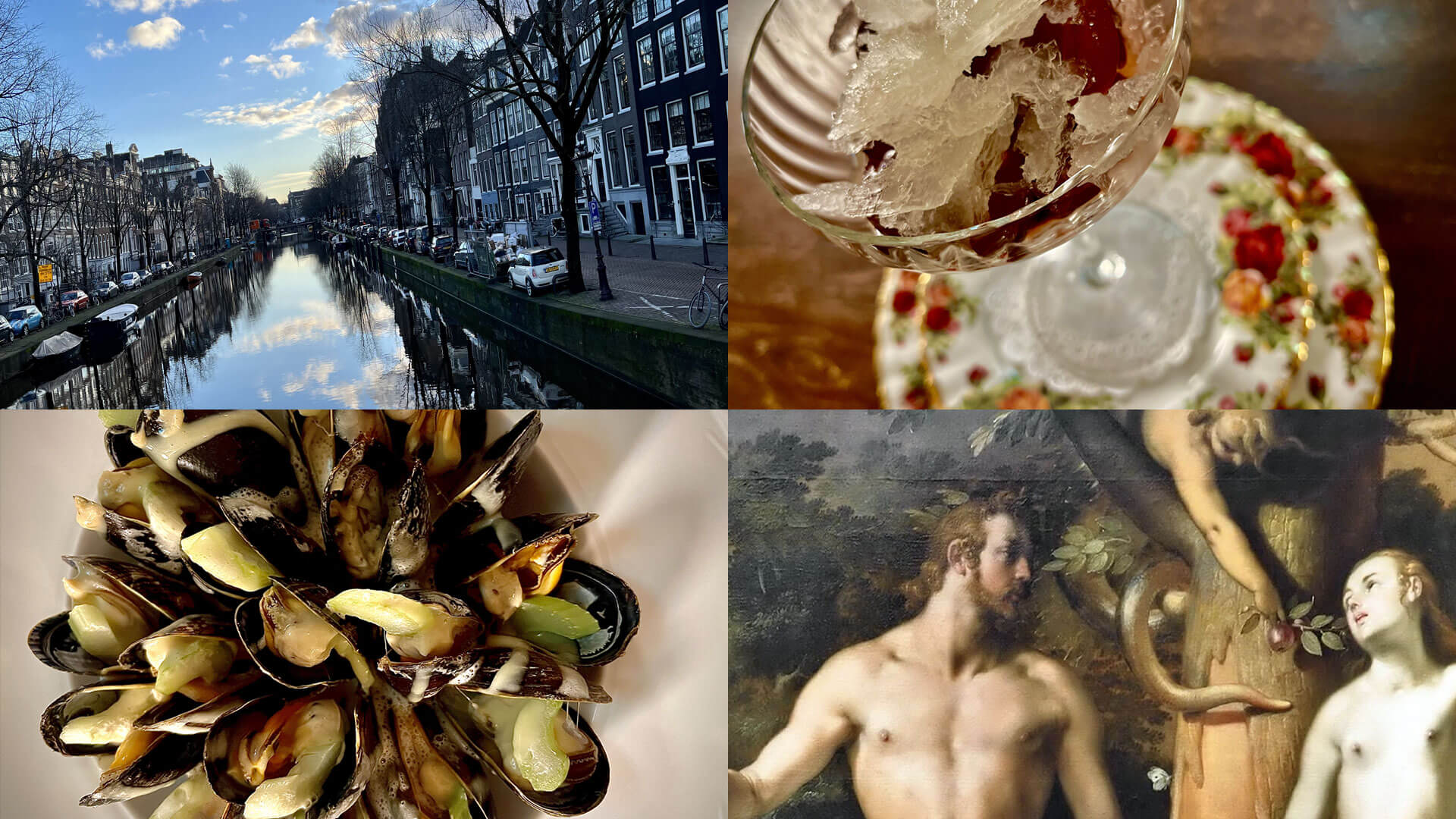 At Bistro De La Mer a few minutes from the opera house you’ll find a terrific fish lunch, where I had among other things completely brilliant mussels, steamed, then stuffed with thin slices of fresh celery and served on a bed of madouvansauce, a kind of French curry you should immediately explore on the web.

After the turbot with baked strawberries under bacon, a light dessert of marinated grapes with gin tonic granité is recommended.

A kind of absolution can be found at the Rijksmuseum, where, in addition to Adam and Eve, you can greet the old masters such as Rembrandt and Vermeer. The Night Watch remains an impressive masterpiece, even if it is being renovated in its glass cage, live on site.

A few hundred meters from the museum is the Heineken Experience in the old brewery, where it gets you in over your head in cracking, fierce brand videos, and good tasters await on the rather entertaining guided tour that ends in the brewery’s bar. In summer, the party can continue on Heineken’s rooftop.

A canal tour is of course a must, I was lucky enough to make it during the city’s Festival of Lights with atmospheric, arty art installations along the canals.

The fish bistro has two big sisters, the Michelin one-star De Juvelier next door, which disappointed with a characterless wild pheasant but saved the day with beef marrow in mushrooms served in the bone and excellent St Estephe 2016 by the glass. The two-star Michelin restaurant 212 by the same family is good for me next time.

The shopping opportunities in neighbourhood are endless, as is the prevalence of cozy cafes and bars.

Sex and joints continue to be offered uninhibitedly in the famous Red Light District, which can also be visited for the liberal, kinky atmosphere and authentic, listed architecture alone.

Amsterdam’s opera has a packed, varied programme, with many good opportunities for repeat visits. It’s a glorious city full of celebration in every way.