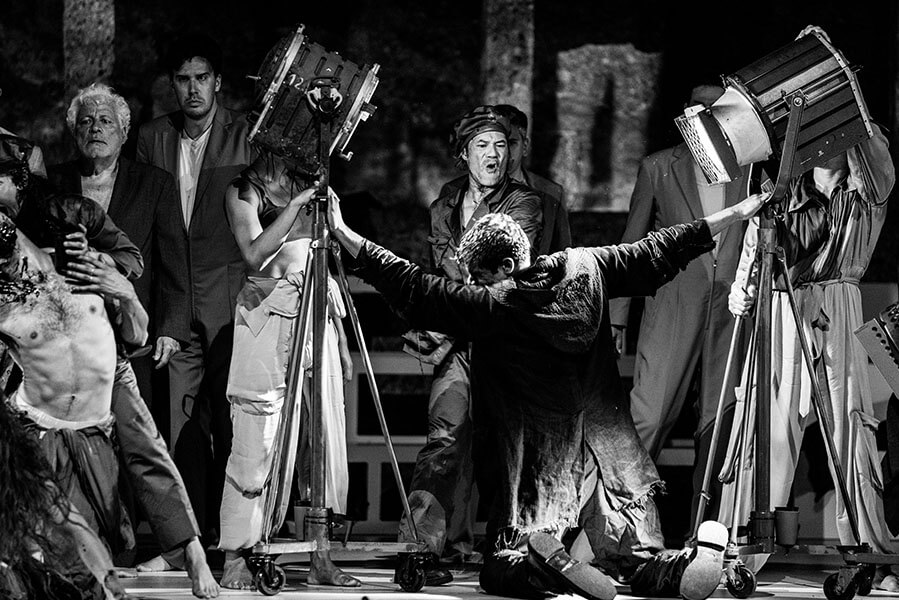 It’s hard with avant-garde. Who wouldn’t want to be at the forefront? But damn, what torture you have to go through both on stage and in the audience, here at the Salzburger Festspiele’s gala premiere of Luigi Nonno’s left wing propagandistic piece of music drama INTOLLERANZA 1960.

Nonno himself was a partisan in the fight against the Italian fascist regime under Mussolini. He was a brave artist with something to say and not afraid to take up arms, either the sword or the pen.

Nonno, who was born in Venice left this world in 1990, wanted to do away with the usual opera format that has always defined an elite music and fine culture for all the assholes in the better society.

So we take 75 cast members and stick some blinding spotlights in their heads – and go crazy with explicit torture, beatings and bullying, so it splatters.

And we go on for a really long time, until both victims and executioners are covered in slime and blood.

(Of course, there’s also one of the victims who yells I can’t breathe during the torture, so we’re right up to speed. Nothing is sacred.

The frame story is a predictable tale of a migrant fleeing war and terror in his homeland. He works in a mine of sorts but manages to get away from it.

Only to be arrested by the police, along with a large group of freedom-loving like-minded people, at a peace demonstration he has joined on his way home to the lost horizons.

After harsh interrogations at police headquarters, the endless torture begins, leaving the gala-dressed theatre in silence and disgust.

After the torture, the protesters are sent to a concentration camp, from where the migrants manage to escape and find their way home to the lost land.

However, the river, the last stop before reunification, overflows in a capitalist-initiated climate catastrophe and washes away all hope.

The music is completely atonal, and the scattered arias that grow in and out of the soundscape weave a sickening web around it all.

It sounds as horrific as what you see on stage.

A blind poet on a pedestal stage right, wracked by incessant, spastic tremors after what we must assume are PTSD traumatic after effects, comments on the atrocities along the way with shouts and screams to the audience. Are you blind? Why don’t you do something!

The big idea is that the world can be changed through art, by promoting the cruelty and degradation in powerful images – and thus making us think.

Personally, I was mostly thinking about when this horrible performance would end and I could get out of there.

From the communication psychology behind commercial fundraising campaigns (famine, genocide, torture), we know that overly strong horror images make people turn away, instead of reaching for their pockets.

As a defence against repression and police violence, INTOLLERANZA 1960 has not yet established itself.

The staging is undeniably strong and accomplished, but borne of a leftist indignation that seems old-fashioned and mega tiresome.

That the premiere takes place on this very night, when Kabul falls to Taliban darkies as radical in nature as the powerful oppressors of fascism and Nazism, gives it all an extra perspective of hopelessness.

Enjoy the theatre I say… 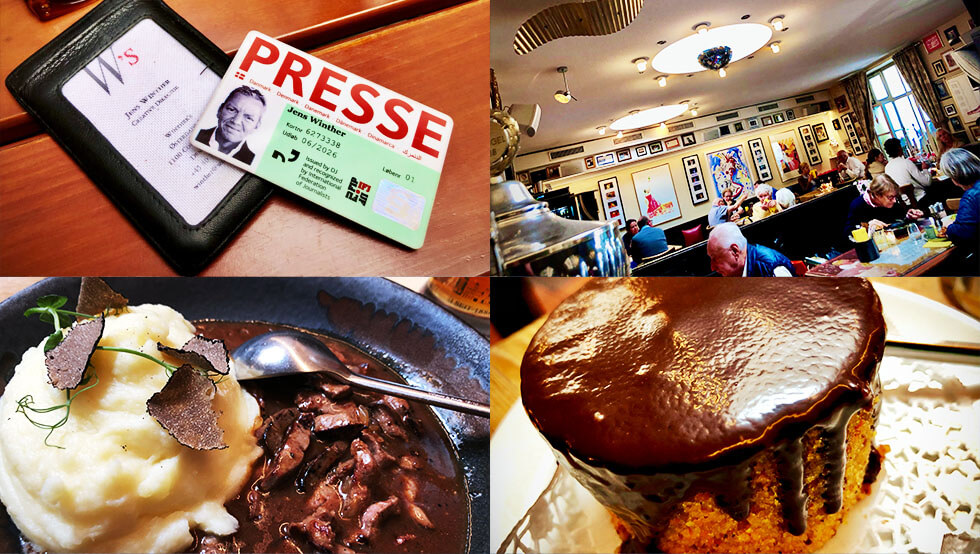 BECOME A THEATRE INSIDER AT TRIANGLEL

Trianglel is the name of a quirky little restaurant on a triangular square at the end of the street with the Salzburg Festival Opera House.

It’s where the people from the opera industry meet. Managers, performers, directors, musicians, backstage crews, secretaries, followers, – and of course leading critics from the international opera press, this evening distinguishedly represented by Det Sku Du Se’s  (Got to see this) envoy.

The menu is a mess of Italian starters and mains – burrata, pasta, prawn cocktails, tomato soup, smoked salmon – and some local favourites like wienersnitchzel and that kind of heavy stuff.

I was a little dubious about the fish dishes (it’s a long way to the sea from Salzburg), so I opted for a simple, filling meat dish that would ensure a decent shot of carbs for the impending review at the opera.

Wow, I just had the most glorious portion of veal liver in red wine sauce that I’ve enjoyed in a long time.

Thinly sliced pieces of veal liver completely free of tendons, put in a tasty red wine sauce and served with a mash of root vegetables.

Ok, I also ate a little chocolate cake even without spilling on my tuxedo shirt. It was as dry as the Sahara under the solid chocolate layer and I definitely should have chosen something else for my coffee.

Triangle has a perfect opera location and a fun, arty vibe. The place is a classic and clearly more practical than culinary. But it’s also down to earth. Eat inside or outside on the wooden benches under the parasols with a view of the whole circus.

Later, I was told that the trendy opera incrowd has moved on to another nearby restaurant called Ress und Lieblich, where goulash, sausages and beer set the scene for the artistic selfie.

It’s the kind of thing you always find out too late, but now YOU know, and maybe we’ll meet there next year.