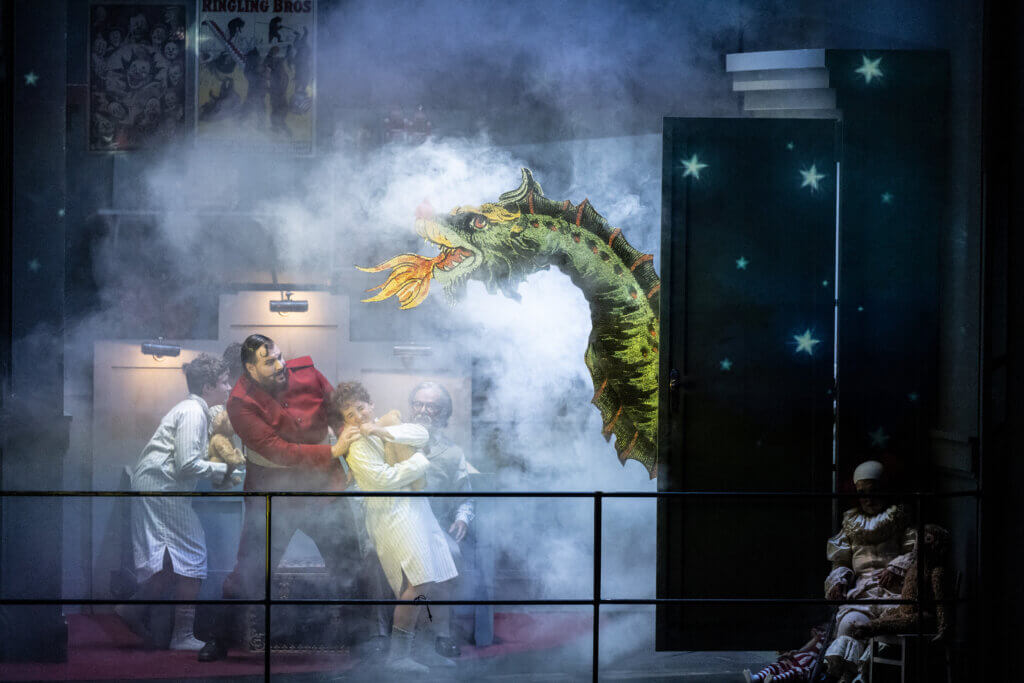 REVIEW OF THE MAGIC FLUTE: MOZART MISTREATED IN THIS YEAR’S SALZBURG FESTSPIELE

The Magic Flute in a convoluted, confused and twisted version was what the stunned festival audience had to hold their masks up to, in the revival of American director Lydia Steier’s controversial 2018 version of Mozart’s classic.

Time doesn’t seem to have matured the staging’s qualities, though the ill-fated Ukraine war puts the piece’s wildly exaggerated, albeit well-executed visuals into an uncomfortably topical perspective.

The director has conjured The Magic Flute into a meta-layer bedtime story for three well-heeled boys from the upper middle class in the pre-World War I era.

Soon they are actively participating in the story along with a messy array of grey suits in bowler hats, giant furry teddy bears and a platoon of battle dressed soldiers.

The multi-storey template set is not crazy, nor is the fanciful Escher-ish castle with intricate, ‘impossible’ staircases and balconies, where a host of cast members give it their all in labyrinthine confusion.

The whole circus underscores the Disneyfication of Mozart’s event opera, which has been given all it can pull and has ended up an overloaded, effects-chasing mess, albeit a spectacular one at that. Le Figaro calls Lydia Steier’s take virtuosic, the French are perhaps just a little more fiercely disposed or what.

A kindly grandfather is added as a sort of moderator, reading aloud from the fairy tale and continually summarizing the action, thus actually quite cleverly bypassing the endless dialogue that hampers the original.

Disgusting video sequences of battle scenes from the WW1, including close-ups of mutilated casualties, are blown up well on the set pieces, effectively as hideous manifestations of the eternal struggle between good and evil.

Prince Tamino’s journey to divine insight and Papageno/Papagena’s cute lovestory get a little lost in all the gunpowder smoke along with Danish/Swedish barytone Henning von Schulman, who is otherwise vocally convincing in his parts.

The direction was left to Loana Mallwitz, who pressed the accelerator well and a little too often left a yapped and chased expression. I already had misgivings during the overture, which went too fast and lacked drive at the same time.

The Queen of the Night, American Brenda Rae, an acclaimed concert vocalist, could barely reach her iconic Aries high F’s. (Notoriously difficult and four notes higher than high C.)
As a manifestation of true Salzburg class, the performance did not occur.

The staging, a partially reworked version of the 2018 version, has received flak in the German opera press and fails to pull the plug on a second attempt. Effects without effect, as the saying goes.

Nothing is really bad at the Salzburg Festspiele, but in comparison to other productions this year, The Magic Flute lands as a bit of a flop, despite a fireworks display of action and crazy input.