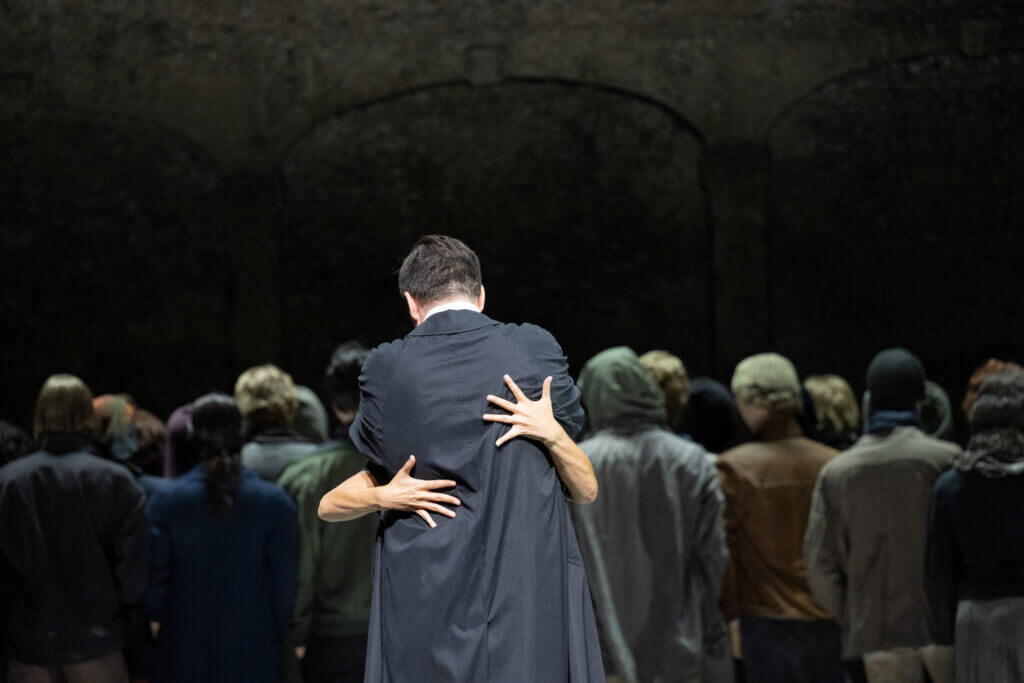 You and I did.

The answer slowly dawns on you in Barrie Kosky’s refined production of Katja Kabanova, which, with mountainous orchestral playing and a dazzling Corinne Winters in the title role, brings the audience down at the festival here in Salzburg. (No, I’m not related to her.)

Kosky wins big in this subtly staged production, which can hardly be called underplayed with its 2-300 extras on stage, dressed in plain everyday clothes with their backs to the audience throughout.

The tableau turns out to be an absolutely intelligent touch from the esteemed director, who has read how to spread out perhaps Janacek’s best opera, which is essentially a pocket-sized chamber play – across the whole of the spectacular Felsenreitschule stage, which is well over 100 metres wide.

If you think the many extras will erupt in wild crowd-bonsanza in a rousing finale, think again.

They hardly move out of the way.

It’s easy to fall for the tactical plot – with Katja Kabanova as the victim in the microcosm of family fight that plays out in the home under the tyrannical rule of mother-in-law Kabanicha.

Kosky, of course, can’t shy away from a generous sprinkling of the signature humorous-sexual spice he always adds to his productions.

But that’s not what Katja is about at all.

It’s about you and me.

Fuck the public opinion, someone once said.

Katja doesn’t succeed, drowning in Volga of shame and despair at her hopeless future, as her way out of it all ends blindly at her boyfriend’s dispatch to ‘family business’ in the capital. Someone smelled the fumes.

Like an ill-fated afterthought, her wet dress dangles dripping from the end of her mother-in-law’s cane as Kabanicha thanks the silent crowd on stage for their help.

Faceless #MeToo hate and social media shitstorms, can be read into the punchline at will.

this is gripping stagecraft, which the Vienna Philharmonic elevates to six sparkling stars, as the best performance at the Salzburg Festspiele 2022.

PS. After the performance, I’m enjoying a drink at the champagne bar outside when a couple of minitrucks a la the ones baggage services use at the airport drive by with several carloads of extras, some of whom I recognize from Katja.

Only then do I realize that the hundreds of extras have been dolls – so well mixed with live people (the opera chorus, stupid) that I didn’t notice in the dimly-lit, Eastern European stage lighting, even though I was sitting in the front row.

I was first flabbergasted, then embarrassed, until I read that the reviewer from the New York Times itself had also been duped. Maybe that just says something about the level of staging here in Salzburg.

You got me, Kosky!