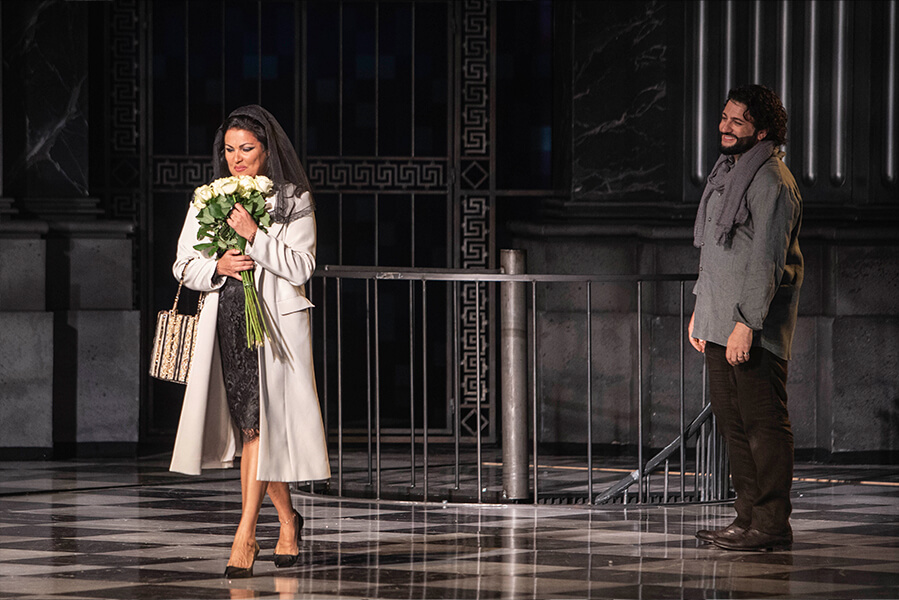 Anna Netrebko, one of the most celebrated super sopranos of our time, sprinkles stardust over a fine Tosca at the Salzburg Festival.

Updated flourishes from director Michael Sturminger make the evening splashy, but Puccini’s fabulous music in the hands of the Vienna Philharmonic is unstoppable. Tosca is absolutely superb opera with its compact plot, huge set design, fantastic villain and two of the most iconic arias in opera history.

Director Michael Sturminger already debates in the programme notes whether to modify anything in Puccini’s Tosca, which has been hailed by many as the world’s best opera.

Sturminger has chosen a problematic both/and solution in his staging of this Tosca, which, with Russian superstar Anna Netrebko in the title role, has filled Salzburg’s Grosses Festspielhaus to capacity. A clearly well-heeled elite audience provides a massive array of gala gowns and brilliant jewellery worthy of a royal celebration.

Outside, razor-sharp power limos and flabby sports cars line the streets (Audi is among the festival sponsors, showing off all the luxury models, with suit-clad drivers waiting side by side. It’s a stunning spectacle, suitably illuminated by paparazzi flashbulbs flashing into the bubbling champagne glasses of the exuberant, small-talking opera audience in front of the theatre and in the foyer. Glorious!

Perhaps it’s Sturminger’s passion for filmmaking that has led him to open this Tosca with a powerful, action-packed surprise that’s straight out of a blockbuster.

The stage floor rises and we’re instantly down in a modern car park, where a James Bond-like shootout unfolds in semi-darkness with a guarded transport under attack – masked partisans and battle-dressed guards are glimpsed through smoke bombs, flashes of shock grenades and the noise of bursting automatic weapons. A liberation action, we understand.
Soon after, the floor is lowered again and we find ourselves in a foolishly beautiful version of the Roman church of Sant’ Andrea della Valle, where the fleeing Angelotti is now hiding from Scarpia’s policemen. Quite an intro!

From here we continue (for now) in more familiar surroundings, as the glorious arias take their turns and the most wonderful music is allowed to fill the hall.

Artist Caravadossi is busy decorating the church, presented in a formidable widescreen stage design by Renate Martin and Andreas Donhauser.

Here he is visited by his girlfriend Floria Tosca, who pops in to arrange a date – and just to check that the artist isn’t playing pranks on the models he uses as models for the artistic displays.

It’s their interlocking love affair that drives the rest of the violent drama that’s about to unfold. And what a drama!

In addition to being a murderously jealous and celebrated singer in the narrative’s Rome, with Napoleon’s occupying/liberating army on the march, she is also unfortunately the object of the possessive lechery of the humble police chief Scarpia. (Best tasting to me is love taken by force! That’s where we are!)

The plot of Tosca you know, of course, but you get a brush up.)

Scarpia is on the hunt for the escaped political prisoner, the republican Angelotti, and cunningly uses Tosca to lead him to his prey.

As part of the plan, Caravadossi is arrested – and it’s his screams from the torture chamber that prompt Tosca to reveal Angelotti’s hideout and make a diabolical deal with Scarpia to trade a defiant bang on the coffee table for Caravadossi’s freedom.

It is here that the audience gets what it has come for – the superstar’s masterful version of the mega-hit Vissi d’arte (I lived for art, I lived for love.)

The famous aria, delivered by perhaps the greatest soprano of our time in these top-class surroundings, leaves not a dry eye – and the applause deservedly hammers down on Netrebko in the opera’s unusually well staged signature sequence. A magical moment in which Netrebko shows her mettle, so that you don’t forget it straight away.
Taste Tosca’s kiss is the iconic line, as shortly after she kills Scarpia with the knife from the fruit bowl and we think the day is saved – but alas.
Scarpia has a trump card up his sleeve and it ends badly for everyone involved.

Unfortunately, the stardust doesn’t last all the way home, which is why there have been some divided opinions about this Tosca in the international opera press.

Among director Sturminger’s ‘updates’ is a modernisation of the soldiers in the execution plot, who out of the blue have become a handful of Hitler Jugend-esque, brainwashed orphanage boys (who are the ones given the job of executing Caravadossi with loose powder that isn’t as loose as agreed.

Furthermore, it turns out that Scarpia is not dead by Tosca’s hand but shows up at the end and shoots her before she can jump from what used to be the fortress tower of Castello Sant’Angelo. But it’s not like that here.

Sturminger, in fact, has the final scene, including the tenor hit Lucevan Le Stelle, take place on the roof of a hotel called Il Divo, which may or may not refer to Italy’s former, scandal-ridden head of state Andreotti, whose corrupt abuse of power Scarpia’s evil is somehow whitewashed over.

Quite a long pass to run after, oder was?

Netrebko is a Tosca of towering class, given the opportunity in this opera to play a mirror image of herself as a celebrated diva.

She does so well that Eusif Eyvazov as Caravadosssi pales somewhat, if not very much, beside her. The beautiful tenor part takes on a slightly sharp, forced sound this evening and is heard much better.

As the evil Scarpia, the French, Marseilles-born Ludovic Tézier makes a fiery, convincing impression with his fine baritone.

I immediately bought a CD of him singing Verdi arias, and I’ll give you that baritone – a blazing dark tone and silky legato. Keep an eye on the name and see him if you get the chance.

The side parts like Spoletto and Angelotti don’t throw much. Both performances, however, were accepted reasonably well by the discerning audience.
The same was not true of director Sturminger, who had to listen to some tuxedo-clad boos when he came on stage for the encores.

A bit scary, but also a bit cool, because of course it all adds a bit of nerve, amid all the measured politeness that is Salzburg. A good Tosca just isn’t good enough here.

The Te Deum scene, which ends the first act, is at its best, with a huge chorus and all the extras on stage in a lavishly staged, Catholic piece of equipment set to effervescent music at full volume.

So Sturminger can come up with all the weird antics he wants, absolution is at home. We land on four stars. 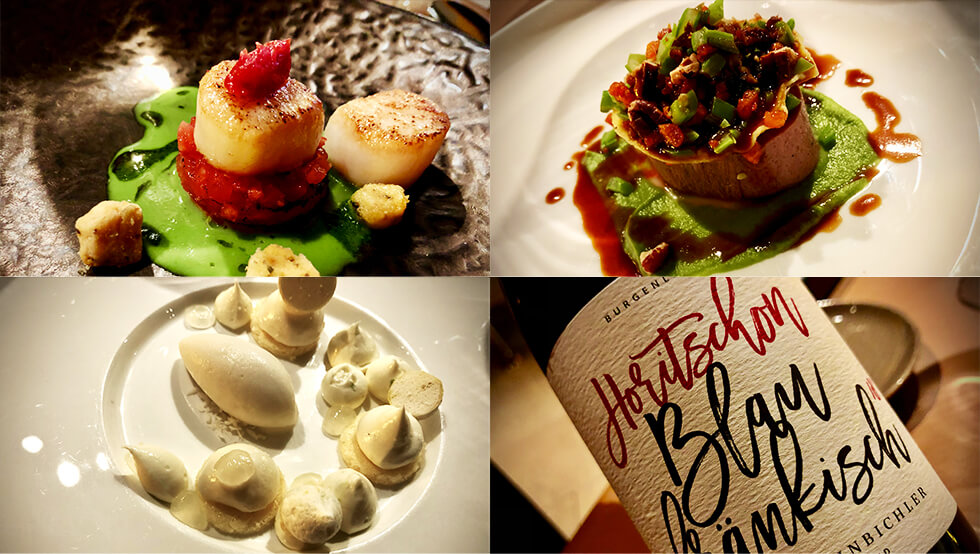 ESSZIMMER DELIVERS WHAT THE STAR PROMISES

One of Salzburg’s Michelin stars is flashing at gourmet restaurant EssZimmer, a 5-minute bike ride from the city centre.

15 minutes if it’s pouring rain and you spend half the time twisting your suit under a tree. (They did stare a bit when I walked in.)

The restaurant, run by Andreas und Andrea Kaiblinger, could do with a new interior designer, but the kitchen has the details down and serves up a beautifully composed Michelin-starred menu that needs a bit of tweaking. The prices have also been dulled down, but are still reasonable.

EssZimmer also has the advantage of being open for lunch, which proved to be a rarity among the city’s other top eateries during my review stay.

Pretty impractical when evenings are spent in the theater and almost no one is open after theater hours.

But let’s get to the table…

The kitchen set out with a nice, snacky little dish of raw marinated trout with two textures of carrot.

This was followed by the first course, a beautiful variation of foie gras with mushrooms and apricots. A fine 2018 Riesling from Hirch was poured into the glass.

Next course was a rather flavorful serving of scallop on crispy watermelon. Original and rather well seen – a delicious crispy texture rounded off by a cream of peas and tomato.

The Spanish Gewürtztraminer with distinct florality made good sense.

Uha uha, here came the caviar! A spoonful was mounted on top of a piece of skin-fried catfish that spun in a bath of rich broth – the best dish of the meal.

Slightly more traditional, but certainly tasty, was the veal sirloin with oxtail ravioli and crunchy greens.

Desserts are always a bit of a playground at Michelin restaurants.

Cheese brulé is perhaps a necessary experiment. But as a test subject, I had to withdraw halfway through. I guess you have to be a mother to really love this dish.

Love at first sight, however, was there when the last course, variations of coconut in meringue, parfait and white chocolates, was served with a superb Spätlese.

Great craftsmanship and a really good time at EssZimmer, which delivers what the Michelin star promises.