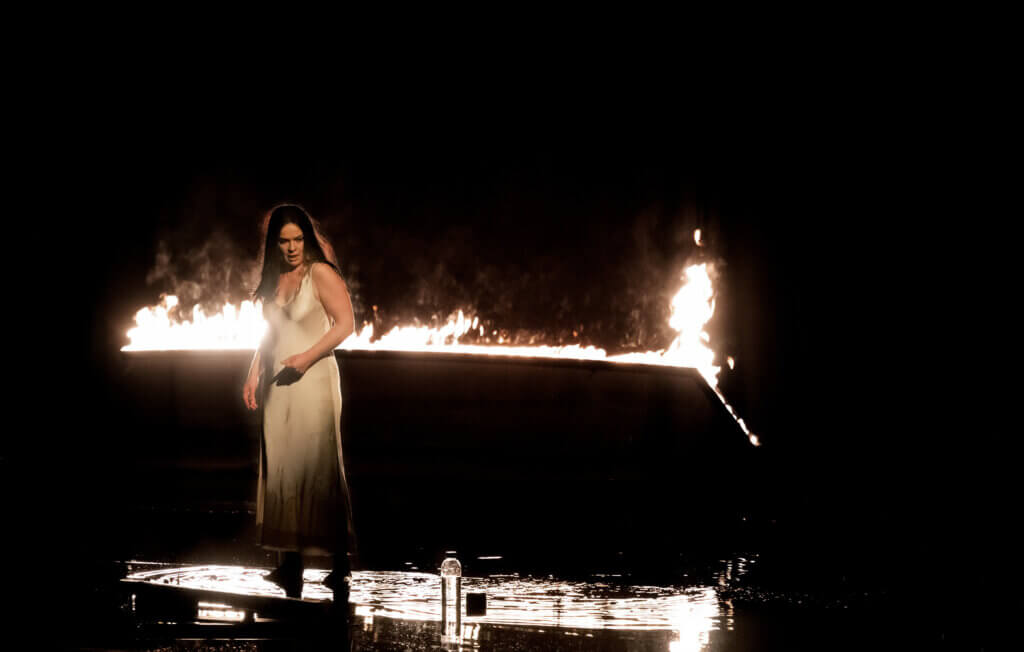 That was true of last year’s provocative version of Don Giovanni – as it is of his bold, extremely stylish execution of The Duke Bluebeard’s Castle, which in this Salzburg Festival edition is far from the children’s adventure and images suggested by the blue-bearded title.

The tale is essentially a 17th-century French folktale, which Hungarian composer Belá Bartók set to opera from a libretto by his friend Belá Balázs.

Remember the British 80s band Curiosity Killed The Cat, who have a few radio hits?
The name suddenly struck me because the story of Duke Bluebeard runs along that track.

Judith has fallen for the Duke and leaves her life to live with him in the castle, about which there are admittedly certain rumours…

Castellucci has staged the bloody story, which reminds a bit of Dario Argento’s Italian ‘Giallo’ horror/splatter films. (Suspiria and others).

The stage is set in an all-encompassing darkness, lit only by live fire in tight geometric shapes that point by point and in turn light up the giant theatre space of the Felsenreitschule. Large pools of water on stage provide surreal reflections, ensuring a truly extraordinary look to this ambitious and deeply original production.

The chamber play has only two cast members, Ausrine Stundyte and Mika Kares. Vocally they drive home what in a football report one would call a working victory.

The story is grim – in the castle Judith finds seven doors, which she opens one by one, despite the Duke’s admonitions.

Behind the doors are hideous instruments of torture, icy, weeping walls, vile weapons, treasures of gold, silver and precious stones – and even a wonderful flower garden, the only minus being that everything is splashed with blood – and the lakes filled with tears.

None of this, however, we see, for as the prologue asks – is the scene set outside? – or inside?

Behind the last door, the Duke keeps his ex-wives locked up alive. A fate Judith comes to share as she cannot resist also opening this last door to what we understand is the Duke’s mind itself.

Not everything is good to know, the moral seems to be. The openness, as we know, can be so great that neither party benefits.

Several seasoned audiences I spoke to in Salzburg described this performance as the artistic scoop of the festival.

Personally, I recognize the production as absolutely innovative and visually superior – top blistering, but also somewhat insistent in its monotone execution.

Bartok’s expressive music was deftly delivered by an eloquent Mahler Jugendorkester, who played with nice tone, great volume and a good drive in the blazing darkness.